2020 Kennedy Oaks Day continues the racing action of the Melbourne Cup Carnival today, Thursday November 5, and below the Races.com.au team will be updating the live Flemington race results for VRC Oaks Day across the afternoon. 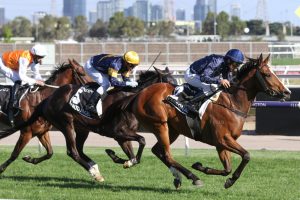 Personal was too good for her rivals thanks to a gun ride by Damien Oliver in the 2020 Kennedy Oaks. Photo: Ultimate Racing Photos.

Oaks Day or ‘Ladies Day’ racing features a triple shot of Group racing action with the two-year-old fillies facing off in Race 2 for the Ottawa Stakes and the three-year-old sprinting fillies engaged in the last when Race 9 has the Red Roses Stakes closing the card.

Between those two is of course the highly-anticipated Group 1 $1 million Kennedy Oaks (2500m) for the three-year-old fillies showing staying potential and with a Soft-rated track it will be a definite test of stamina for the 14 engaged in Race 8 at 5:10pm (AEDT).

Punters are rallying around the David Payne-trained Montefilia who is odds-on at Ladbrokes.com.au to continue her elite spring form in Melbourne off the back of her historic Group 1 Flight Stakes – Spring Champion double in Sydney.

With plenty of exciting racing at HQ all day make sure you bookmark this page to stay up-to-date with the full Melbourne racing results, live Oaks Day winners and the official 2020 Kennedy Oaks Results!

Jockey William Pike added another Melbourne Cup Carnival winner to his record aboard the Hawkes Racing-trained favourite Written Beauty who let down late in the last on Oaks Day. The flying filly flashed to victory in the Group 3 Red Roses Stakes coming right down the outside to defeat a brave Marboosha with Celestine in third.

Jockey Damien Oliver celebrated his sixth success in the 162nd running of the Group 1 $1 million Kennedy Oaks (2500m) at Flemington with the Lindsay Park-trained Personal finally shrugging her bridesmaid status to win the classic in a thrilling finish over Salto Angel and the beaten favourite Montefilia.

Read more on the brilliantly-timed 2020 VRC Oaks winning ride by Oliver aboard Personal. 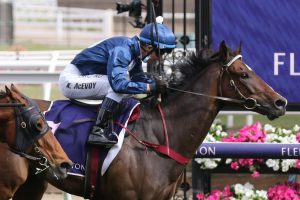 The Julius Sandhu-trained So You Think five-year-old Do You Reckon scored his biggest career success on Oaks Day, ace hoop Kerrin McEvoy guiding the galloper from Cranbourne to a determined victory in the $500,000 Melbourne Cup Carnival Country Final over the mile. McEvoy became just the seventh hoop in history to celebrate his 50th Melbourne Cup Carnival success thanks to the late upset on 25/1 shot Do You Think who got to the front 100m out from the line and darted away to defeat the always-honest Kaplumpich with Tatunka in third. 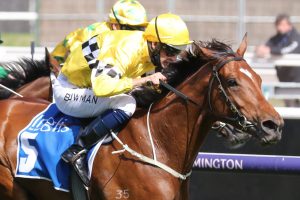 Jockey Hugh Bowman made it back-to-back wins on Oaks Day saluting in the inaugural running of the lucrative $250,000 Inglis Bracelet aboard the John O’Shea-trained market mover Rocha Clock who jumped favourite and saluted for the punters with success over Re Edit and Game Of Thorns.  Rocha Clock was ultra-impressive over the final furlong making up all the ground from second last to first, pouncing in the dying stages to salute in an exciting finish against the luckless Re Edit who couldn’t get out until the last 100m. 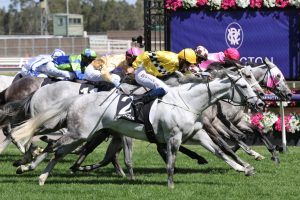 Hugh Bowman saluted on the John O’Shea-trained Berdibek in the greys-only race on Oaks Day, the Dark Angel seven-year-old racing for the first time since a Randwick win back in December. The veteran sat last in the running before looping the field and storming down the outside to put his nose down right on the line in a thrilling finish to defeat Star Missile with Mr Tipla in third. 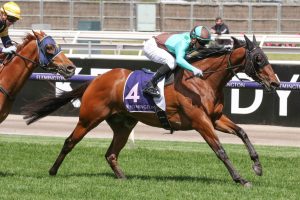 Brett Scott’s Zed six-year-old Irish Flame worked around the field in the Twitter Trophy to settle second behind the front-runner Think We’re Due in a steadily run 1800m, before taking the lead at the 200m and holding on to defeat the challenger and notable improver Hang Man by three-quarters of a length. Backing-up off a Manikato Stakes Night win over 2040m at The Valley, Irish Flame made it two wins on the trot at a nice price, while Savaheat rounded out the trifecta in third. 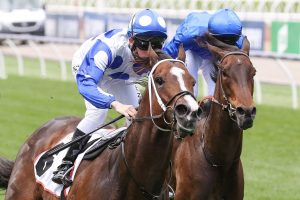 Ancestry is on track for the Group 1 autumn sprints next year after winning on Oaks Day. Photo: Ultimate Racing Photos.

The Phillip Stokes-trained Ancestry was too fast and too good down the straight in the Listed G.H. Mumm Century Stakes on Oaks Day, apprentice Michael Poy enjoying his fourth win from four rides aboard the flying four-year-old. Leading all-the-way, Ancestry hit another gear over the final furlong, gliding to the line to defeat Garner with Villami getting third in a photo over Varda. Ancestry looks set for a big autumn next prep targeting the Group 1 Oakleigh Plate at Caulfield on Blue Diamond Day. 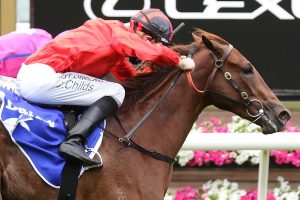 The Grahame Begg-trained debutant Dosh just held on right on the line, the very green Rich Enuff filly looking to have thrown it away with her wayward run down the straight before securing the 2020 Ottawa Stakes win in a photo-finish. The very promising type had to tough it out up on top of the speed, but she bounced out beautifully from the gate, showed plenty of natural speed and cruised in front. When jockey Jordan Childs asked her for more, she didn’t know what to do, but she finally found her game with her nose down right on the line to hold out the late charging Nice For What with Butter Blonde third. 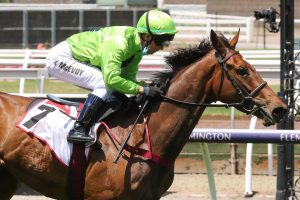 Symon Wilde’s Tavistock mare Tralee Rose charged up the middle of the famous Flemington track over the final 100m to push forward and salute in her second start this preparation, the four-year-old making it two-from-two after a lead-up win at Warrnambool. Jockey Kerrin McEvoy got her up over the top of Tragic late, while the front-runner Ocean’s Thirteen held for third to round out the trifecta in the first on Oaks Day.

The field for the 160th edition of the Group 1 $8 million Lexus Melbourne Cup...