Cherry Tortoni is the early 2020 Victoria Derby betting market mover with plenty of support coming for Patrick Payne’s Vase winner to win the big one at HQ on Saturday. 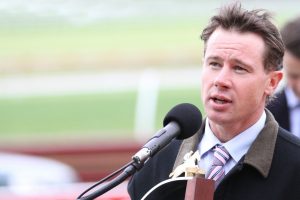 Flemington’s Melbourne Cup Carnival is underway on the weekend with a bumper day’s racing headlined by the three-year-olds facing off in the Group 1 $2 million AAMI Victoria Derby (2500m).

A field of 14 young stayers is set and, despite the outside barrier 14 draw, back in form Night Of Thunder gelding Cherry Tortoni is getting plenty of early love from the punters.

The boom juvenile who came into the spring undefeated returned to the winners’ stall fourth-up on Cox Plate Day taking out the Group 2 Moonee Valley Vase (2040m).

He is now out to do the double for the first time since Efficient (2006) and has been backed in from $6 to $4.20 in the latest Victoria Derby odds at Ladbrokes.com.au.

The only runner shorter in the markets at an easing price of $4 is the lightly-raced favourite Young Werther for Melbourne Cup winning trainer Danny O’Brien.

O’Brien is a top trainer of young staying types, evidenced by SA Derby champ Russian Camelot, and will attempt to win the VRC Derby on Saturday with his Tavistock gelding Young Werther having just his third career run.

A Geelong win on debut in early September was followed a month later with a second to Khoekhoe in the Listed Super Impose Stakes (1800m) at Flemington.

With his runs spaced again, Young Werther is tipped to handle not only his first Group race assignment but also his first start over further than 1800m with the pressure on in the Derby.

Favourites however have a poor recent record in the VRC Derby results with just two since 2006 getting the job done for the punters.

Young Werther is out to become just the third Victoria Derby favourite since 2006 to salute for the punters this weekend Bet now with Ladbrokes.com.au

Outside the dominant duo in betting there are a further two single-figure fancies to take out the staying classic with the Matt Cumani-trained Hit The Shot ($6.50) and Albarado ($7.50) drawn alongside each other in barriers nine and eight respectively.

Dundeel colt Hit The Shot gets the chance to hugely improve his future value at stud, the up-and-comer looking to go two better than his devastatingly close third in the Group 3 Norman Robinson Stakes (2000m) from Caulfield Cup Day.

Albarado won that key lead-up in a photo, the Trent Busuttin & Natalie Young-trained Savabeel colt now out to complete the double with Mark Zahra retaining the ride.

On the drift for last weekend’s Cox Plate winning trainers Ciaron Maher & David Eustace meanwhile is Let’s Karaka Deel out from $7 to $10 despite a good lead-up run when second in the Norman Robinson and ideal gate three draw.

Of the value runners after an upset at bigger odds, Johnny Get Angry ($34) presents as one of the best roughies in the mix having run a distant third to Cherry Tortoni in the Vase.