Queensland two-year-old Rothfire has added a Group 1 to his already growing resume by taking out the $350,000 JJ Atkins (1400m) in an absolute canter on his home track.

The son of Rothesay raced every bit like the $3.50 favourite at Eagle Farm on Saturday as jockey Jim Byrne established a spot two-off the fence before kicking clear to win by a comfortable three lengths. 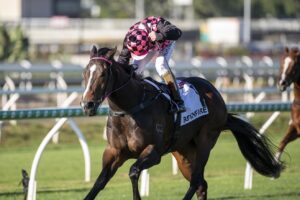 Rothfire, who has now won six from seven starts, got out well from the barriers and was happy to settle off the speed. The race tempo suited his turn of foot perfectly in the end, leaving trainer Rob Heathcote with his eyes towards the future.

“He’s some horse. I’m lost for words, and that’s not normally me,” Heathcote said after the race.

“He’s climbed his Everest today, and note I did use that word, Everest.”

Heathcote now plans to head to Sydney in the Spring for the world’s richest turf race, The Everest, at Randwick on October 17.

Rothfire has already received a touch up in All-In 2020 The Everest betting markets at Ladbrokes.com.au, firming into $21.00 following his first Group 1 win.

“He’ll go to the paddock on Monday, I’ll take him around myself. He’ll take a nice break, we’ll set a plan in concrete as we get closer to a race, there’s a couple of races down in Sydney, maybe now that will open the door,” Heathcote went on to say.

Gotta Kiss held on for second on Saturday followed closely by a very brave The Drinks Cart.