Godolphin’s five-year-old mare Alizee got the job done on Saturday in the Group 2 Apollo Stakes (1400m), leaving the blue colours casting an eye on next fortnight’s Chipping Norton Stakes.

Last year’s Futurity Stakes winner was second-up at Randwick after finishing runner-up in the Expressway Stakes a fortnight ago. Alizee went around on Saturday as the favourite but found herself with plenty of work to do in the late stages against a quality field of Group 1 winners.

Hush Writer took up the lead early with Dreamforce also going forward. Meanwhile, Alizee and jockey Hugh Bowman, who won the race last year aboard Winx, found themselves sitting five deep around the turn with plenty of ground to make up. 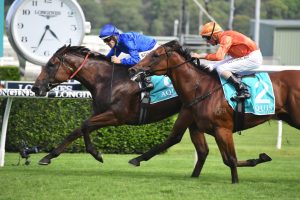 Bowman did a great job shifting to the rail over the final furlong before kicking Alizee home at the 100m mark to chase down the runaway Dreamforce. Trainer James Cummings said after the race that it was a well-deserved victory, although he thought it probably wasn’t the most convincing wet-track win.

“It was a great moment for her. Her wet track record doesn’t read terribly for her, but there are wet tracks wins and wet track wins, and we were really 50/50 on whether we wanted to run on the Soft 7,” Cummings said.

Bowman echoed Cummings by saying changes needed to be made following her first-up run. All in all, he did feel there was an improvement though.

“I’ve got a real soft spot for this mare; I’ve had a lot to do with her recently,” Bowman said.

“We were really happy with her first-up. Last prep I tried to convince James she’s a six-furlong horse and to leave her at that trip and he obviously kept her a bit fresh and did as I asked. But last time things didn’t go our way and this time he’s obviously trained her a bit differently and she was just a bit more settled in herself.”

The Group 1 Chipping Norton on February 29 back at Randwick will be next up for Alizee if Godolphin chooses to go that way. She remains a $5.00 chance in the all-in markets at Ladbrokes.com.au, which can be viewed here.