Peter & Paul Snowden may have missed out on the Preview races in Melbourne but the stable now has the second favourite in Blue Diamond Stakes 2020 betting after the Sydney win by Rulership on Saturday. 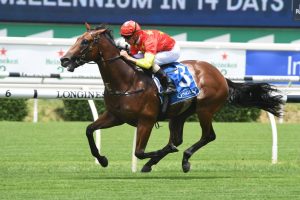 Peter & Paul Snowden’s colt Rulership is in 2020 Blue Diamond contention after a win on debut in Sydney. Photo: Steve Hart.

The father and son training duo had no runner sin the Blue Diamond Preview for colts and geldings, won in emphatic fashion by Hanseatic for the blue army, while their filly Fresh finished second as the beaten favourite behind A Beautiful Night in the girls’ race one run later at Caulfield.

Earlier in the day however Team Snowden celebrated a win in the first at Royal Randwick with the well-backed Rulership breaking his maiden status on debut with jockey Nash Rawiller aboard for the all-the-way win.

“He feels very adaptable and I haven’t ridden a colt with an attitude like him for a long time,” Rawiller said post-victory.

“You don’t want to get carried away, but he gives you the feel of something pretty special.”

The victory caught the eye of bookmakers and Rulership has subsequently firmed in from $21 to $7 in all-in markets at Ladbrokes.com.au on the Group 1 $1.5 million Blue Diamond Stakes (1200m) held at Caulfield on February 22.

The flop of the race was stablemate Mount Fuji, a highly-spruiked $2.8 million Snitzel colt, who finished well-beaten ninth beating home just one other runner on debut.

Mount Fuji may have been disappointing for connections doing everything wrong first-up, but $900,000 Magic Millions buy Rulership did plenty right in his Blue Diamond trial.

“It was probably the difference between a horse that was savvy and knows what he is doing but I am a little bit disappointed by the way (Mount Fuji) handled himself,” co-trainer Paul Snowden said.

“He just pulled himself into the ground the whole way and that’s what you see when they aren’t relaxing well enough to finish off.

“It’s the total opposite to what he is doing in the trial.

“This bloke is the ultimate professional with everything he does, and he remains on target for a Blue Diamond preparation.”

Hanseatic is likely to race next-up in the Group 3 Blue Diamond Prelude (1100m) at Caulfield on February 8, while Rulership will remain in Sydney until the week of the Group 1.

“He won’t go down to the week of the Prelude,” Snowden said.

“We will keep him up and then send him down to take his place.”