A Beautiful Night has stamped her 2020 Blue Diamond credentials with an upset win in eye-catching fashion at Caulfield in Saturday’s $160,000 Group 3 Blue Diamond Fillies Preview (1000m). 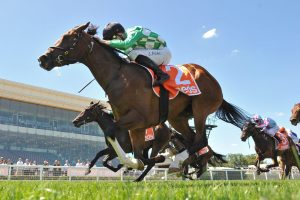 Following on from the runaway win by the Godolphin-raced favourite Hanseatic in the earlier race for colts and geldings, the Blue Diamond Preview for fillies was won in an upset by the Ciaron Maher & David Eustace-trained A Beautiful Night ($14).

The Night Of Thunder filly may have been forgotten by the punters despite a narrow win on New Year’s Day second-up to break her maiden stats at Flemington, but co-trainer Eustace said the stable had been confident all week.

“We were quite confident going into today, we thought she’d been underestimated a little bit,” he said post-win.

“She jumped very well…Johnny took the initiative and he rated her beautifully up in front and she did the rest.”

Away well from her good barrier five draw with John Allen in the saddle, A Beautiful Night found the fence to lead the field around saving all the ground.

Taking advantage of his mount’s gate speed and nice draw, Allen was able to lead from go to whoa sitting on top of the speed before A Beautiful Night gave a big kick at the 200m.

The Peter & Paul Snowden-trained favourite Fresh, coming off a three length Geelong win on debut, meanwhile was four wide throughout before giving chase down the straight.

She ran out of room to completely close the gap however and had to settle for second, A Beautiful Night with a quarter-length to spare over Fresh ($3.60) on the line with a photo for third going the way of the winner’s stablemate Unstoppabelle ($21).

A Beautiful Night’s winning time of 57.27 seconds was an eleventh of a hundredth quicker than the colts and geldings.

“She’ll get better the further she gets out.

“She handles her racing remarkably well,” he said.

A Beautiful Night has firmed right in from $61 to $19 in pre-field Blue Diamond Stakes 2020 odds at Ladbrokes.com.au – available here.