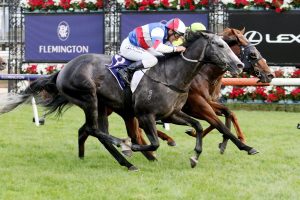 The Kiwi-bred grey has won three of his last four starts and comes into Saturday’s Black-Type clash undefeated with a two-from-two record at the famous Flemington track.

A one and a half length winner of the famous race for greys at HQ during the Melbourne Cup Carnival, Bumper Blast was last seen saluting at Flemington again over Saturday’s track and distance with a narrow victory over River Jewel on December 14.

Backed by the punters in the past 24 hours in from $4.50 to $3.90 to occupy the second line of betting is the Team Hawkes-trained Firsthand drawn one wider in gate five.

Dwayne Dunn retains the ride on the seven-year-old son of Star Witness after riding him to a credible fifth when only 1.75 lengths off the winner Yulong January on New Year’s Day in handicap clash over the track and distance.

Firsthand carried 56kg and faded in the closing stages second-up but presents as an Each Way chance here fitter third-up with a half-kilo less on his back.

“Just the other day, I think he needed the run,” Dunn told Racenet this week.

“He pulled a bit midrace and the small field probably suits him on Saturday.

“He’ll be competitive in that race. It looks a nice for him.”

Three other runners are also at single figures in the latest Chester Manifold Stakes odds with in-form entire Amadeus ($6), the 60kg topweight Duca Valentinois ($7) racing first-up for Godolphin and the rails-drawn Guizot ($9) coming off a fifth in the Group 3 Standish Handicap (1200m).

“So, I think this should be a good preparation for him.

“If the race had have come up a hot race with a big field, we might have waited for another day but it doesn’t look to be a super strong stakes race and with his rating there’s not a lot of options for him.

“It looks like a race he’s going to be competitive in.”

See below for the full Chester Manifold Stakes 2020 field and barriers, the latest odds for which are available here courtesy of Ladbrokes.com.au.