Trainer Chris Waller will chase back-to-back wins in the 2019 Belle Of The Turf Stakes when he saddles-up the favourite in Friday’s Group 3 feature at Gosford, Toryjoy. 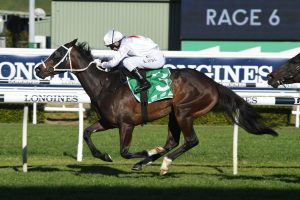 Toryjoy is firming favourite to win the Belle Of The Turf Stakes 2019 at Gosford. Photo: Steve Hart.

One of two Black-Type features on the Gosford race card this afternoon along with the Listed Gosford Guineas (1200m) featuring the return of Exhilarates, this year’s Group 3 $170,000 Belle Of The Turf Stakes (1600m) field attracted 10 female gallopers.

Sitting top of the latest Belle Of The Turf Stakes odds at Ladbrokes.com.au paying $2.90 and firming is Waller’s last start Rosehill winner Toryjoy.

Waller won the Belle Of The Turf Stakes last summer with Sexy Eyes (2018) and also took out the mile feature for fillies and mares in 2014 with Mamwaazel.

This year his runner Toryjoy is drawn in gate six with jockey Kathy O’Hara continuing his association with the in-form Street Cry five-year-old.

On December 7 the mare took out a BenchMark 88 over 1400m fresh at Rosehill and she looks well-suited to take on her own kind second-up over the mile boasting an excellent record over the distance (6:1-2-3).

Occupying the second line of Belle Of The Turf Stakes betting at $4.80 is the 58kg topweight in the quality handicap clash, the Matthew Smith-trained Aqua D’Ivina.

A well-bred daughter of Pierro, Aqua D’Ivina has won two of her three runs over the mile and is out to atone for her last start ninth in tougher company behind Quackerjack in Randwick’s Group 2 Villiers Stakes (1600m) on December 14.

She goes up notably from the 53kg she carried in the Villiers, but this looks a far easier class of rivals for the five-year-old.

The next best in betting at an equal quote of $6.50 are then the Gai Waterhouse & Adrian Bott-trained Statuesquely and the sole filly in the mix Saas Fee.

Drawn a treat in barrier two with Brenton Avdulla to ride, Gerald Ryan’s lightly-raced All Too Hard three-year-old Saas Fee has just her fourth career start in the Belle Of The Turf Stakes race.

Two back in late November at Warwick Farm she broke her maiden status with a 1300m win before a last start second over the same distance at Rosehill in a Benchmark 64 for three-year-olds carrying a hefty 59kg.

Saas Fee was only a half-length beaten with the big weight that day and comes back to 56.5kg this afternoon making her a livewire chance to beat home the older mares at Gosford third-up.

Ryan is confident the filly can outrace her pedigree distance-wise being out of the former Ryan-trained Lightning Stakes winner Snitzerland (2014) whose sire – Snitzel – Ryan also trained to win the 2006 Oakleigh Plate.

“She is not like her mother at all,” Ryan told the media this week.

“Snitzerland was small and nuggety. This filly is tall and rangy and is strengthening all the time and she has plenty of ability.”

Click here for the latest Belle Of The Turf Stakes 2019 odds, the full field and barrier draw listed below.