In-form trainer Mark Newnham is tipped for more feature race success this Saturday in Sydney with his galloper Quackerjack the early favourite in Villiers Stakes 2019 betting at Royal Randwick. 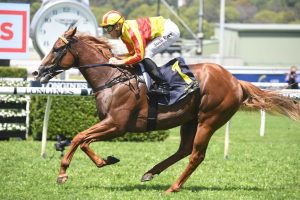 Newnham celebrated plenty of success over the spring including a Group 1 triumph with Shadow Hero in the Spring Champion Stakes.

Leading the all-in Villiers Stakes betting markets at Ladbrokes.com.au ahead of Wednesday’s final acceptances is Newnham’s consistent Not A Single Doubt four-year-old Quackerjack ($4.60).

The gelding is a three-time Randwick winner from eight previous starts at the track and brings in some top spring form to the summer showdown this weekend.

Two back he won the Goulburn Cup (1400m) before a last start second at Kembla Grange in the inaugural $1 million The Gong (1600m) behind Mister Sea Wolf.

Ranier was ridden to victory in the Festival Stakes by Kathy O’Hara, but she is replaced in the saddle for Saturday’s Group 2 by Kerrin McEvoy.

It will be the first time McEvoy partners the up-and-comer since the autumn when he rode the horse for a fifth in the Group 2 Phar Lap Stakes (1500m) in March and sixth in the Group 3 Carbine Club Stakes (1600m) in April.

History is against the class stablemates with those weights as only two horses in the past 20 years have carried more than 55.5kg to victory in the Villiers Stakes: Utzon (57.5kg in 2006) and Monton (58kg in 2011).

El Dorado Dreaming is the better fancied of the two in the all–in Villiers Stakes odds at $7, the Ilovethiscity four-year-old last seen finishing fifth only 1.3 lengths beaten in The Gong.

She ran third in the Group 2 Hot Danish Stakes (1400m) before that at Rosehill and along with her 2018 Group 1 ATC Sires Produce win, has run top three in a subsequent three other elite level races.

Lees is after his second Villiers Stakes success in four years having won in 2016 with Sense Of Occasion who scored the upset at $31.

Equal at $7 in pre-field Villiers markets this year is Live And Free for local trainer John O’Shea, the Savabeel five-year-old coming off a second to Ranier in late November’s Festival Stakes with Glen Boss to ride on Saturday.

The Villiers Stakes 2019 final field and barriers are announced on Wednesday, nominations below and all-in markets available here courtesy of Ladbrokes.com.au.