Chris Waller’s flying sprint star Nature Strip proved his status as one of the fastest horses in the world and put any doubts about his 1200m form to bed with a devastating win in the 2019 Darley Sprint Classic down the iconic Flemington ‘Straight Six’. 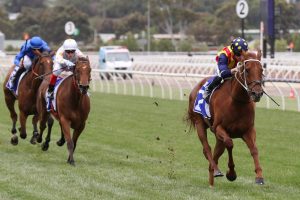 The brilliant Nicconi five-year-old was already dubbed the country’s premier 1000m sprinter but his performance on Mackinnon Stakes Day in the Group 1 $2 million Darley Sprint Classic (1200m) showed he was not just a short-distance specialist.

Retaining his perfect record at HQ, the gun chestnut franked the form out of the $14 million The Everest (1200m) in Sydney becoming the third Darley Sprint Classic winner on the trot to graduate from the world’s richest turf race.

In 2017 Redzel completed the double when The Everest took place for the first time and then last year Santa Ana Lane bounced back from a lead-up sixth to win the VRC Sprint Classic.

Twelve months on and it was Nature Strip’s turn, the horse improving on his last start fourth behind his three-year-old stablemate Yes Yes Yes in a record-breaking The Everest.

The first four horses home in The Everest broke the track record for time in the Randwick feature on October 19.

Nature Strip showed he could handle the best 1200m horses in that race going hard and fast for the top four finish before franking the form in his most dominant turf performance to date.

Ridden by James McDonald, who rode the horse two back for his Group 1 Moir Stakes (1000m) win at The Valley, Nature Strip was allowed to roll out to the front and lead the Darley Classic field around.

The free running sprinter was absolutely cruising in the lead and was simply too fast for any of his rivals.

McDonald barley had to touch the horse who really let down at the clocktower, going for home and accelerating in brilliant style to race away for the all-too-easy, all-the-way win.

“How exciting! I’m thrilled for the horse and thrilled for connections. The horse has just gone to a new level this preparation.

“He was just airborne, he was floating across the ground.

“He ran it out so strongly, I’m speechless really.

“This preparation, from the moment we sat on him, he’s just been faultless.

“We’ve done a lot of work trying to get him to settle. Credit to the whole team there at Chris’s that have done a marvelous job with him.

Nature Strip thrashed his rivals by over three lengths, the next best over the line being the Manikato Stakes winning filly Loving Gaby, while the underrated Kris Lees-trained mare In Her Time rounded out the trifecta in a distant third.

It was a masterful training performance by Waller and co., the whole team working hard to harness the natural speed of the horse and furnish him into a genuine superstar of the turf.

“That was certainly as good as it gets from a sprinters’ perspective.

“We’ve done a lot with him learning to relax and race.

“He’s a very fast horse, one of the fastest horses in the world.”

Potential future racing plans for Nature Strip could include a trip to Royal Ascot next year targeting the international sprint races.