A consolation prize for those horses balloted out of the Melbourne Cup field is on offer at Flemington in Saturday’s 2019 Queen Elizabeth Stakes with True Self the firming favourite to claim the bonus. 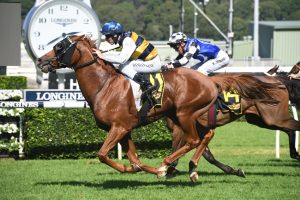 Racing Victoria have a lucrative bonus offer up for grabs to any horses that was balloted out of the Group 1 $7.5 million Melbourne Cup (3200m) – won by local champion Vow And Declare – and goes on to win the Group 3 $300,000 Queen Elizabeth Stakes (2600m) on Mackinnon Stakes Day.

After the early withdrawal of last year’s runner-up Sully, the VRC Queen Elizabeth Stakes field for this Melbourne Cup Carnival is down to 11 runners and it is the William Mullins-trained Irish raider True Self heading the markets.

The Oscar mare was impressive in her first-up run in Australia when second to Prince Of Arran in the Group 3 Geelong Cup (2400m) on October 23.

Prince Of Arran franked that form when crossing third behind Vow And Declare in the Melbourne Cup results, his position officially elevated to second post a protest between fourth and second.

True Self meanwhile did not make the 24 Melbourne Cup horses in 2019 but stands to win the consolation prize this weekend, the second-up specialist lining-up in barrier four with Ryan Moore to ride.

Queen Elizabeth Stakes betting at Ladbrokes.com.au has True Self as the clear $2.05 favourite having been backed-in from opening odds of $2.15.

Second favourite at Queen Elizabeth Stakes odds of $5 is Carif for Peter & Paul Snowden, the in-form So You Think four-year-old coming off back-to-back seconds.

The latest saw him cross 1.5 lengths off Downdraft in the Group 3 Hotham Stakes (2500m) on Derby Day last Saturday, the entire now on the quick back-up.

Another danger is the early market mover having been slashed from $14 into $7.50 in the Queen Elizabeth Stakes odds, Gallic Chieftain.

Archie Alexander’s Tamayuz entire was runner-up in the Group 1 The Metropolitan (2400m) in Sydney two back before an eighth to Hush Writer in the $500,000 St Leger (2600m) at Randwick on October 19.

Rounding out the single-figure chances in the time-honoured Queen Elizabeth Stakes in Melbourne is the rails-drawn Top Of The Range ($9.50).

The Michael Moroney-trained Savabeel six-year-old is on the drift in betting despite a last start Group 3 Bendigo Cup (2400m) win.

Prior to that he finished runner-up to Wolfe in the Group 3 Coongy Cup (2000m) during the Caulfield Cup Carnival.

Check out the full Queen Elizabeth Stakes 2019 field and barriers below, updated odds on the Group 3 feature available here courtesy of Ladbrokes.com.au.