Top-rated seven-year-old Santa Ana Lane returns to Flemington Saturday to defend his title in the 2019 Darley Sprint Classic field and his hot favourite in betting to be the first dual winner of the race since Black Caviar (2010-11). 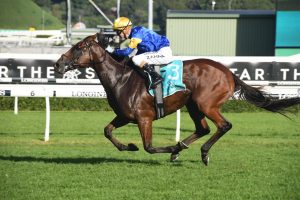 Santa Ana Lane is back to defend his title in the 2019 Darley Sprint Classic field at Flemington on Saturday. Photo: Steve Hart.

Mark Zahra continues his association with the $7.4 million earner who presents fit third-up after two strong seconds this prep.

The latest saw him cross a half-length back behind the lightweight three-year-old Yes Yes Yes in Sydney’s Group 1 The Everest (1200m).

This weekend he is back in Melbourne and looks a hard to beat favourite currently paying $2.20 in the Darley Sprint Classic odds at Ladbrokes.com.au.

“His work on Tuesday was super,” co-trainer Sam Freedman told AAP this week.

“The small field is a little query and so is the rain that’s around but we couldn’t have him healthier and going better.

“If he’s in touch with them at the furlong pole and the track is not too rain affected then it’s probably his race to lose, I’d say.

“He was disappointing in the Everest last year so he’s probably coming in off a better run and he’s third-up on Saturday while last year he was fourth-up.

“So that probably works in our favour as well.”

Three of his rivals are also under $10 in the latest Darley Sprint Classic betting markets including the $4.40 second elect Nature Strip in the outside barrier.

Trainer Chris Waller has dominated the spring in Sydney winning both The Everest and The Golden Eagle, the master horseman also looking to have a livewire VRC Sprint Classic hope in Nature Strip.

The Nicconi five-year-old is the straight track Flemington specialist in the field boasting a perfect three-from-three record at HQ.

Two back he won the Group 1 Moir Stakes (1000m) at The Valley before his brave fourth from the outside alley (12 of 12) when only 1.3 lengths off in The Everest behind his star stablemate.

There are some queries about Nature Strip over the 1200m, but he is in with a chance with an on-speed run likely on Saturday.

Group 1 winning filly Loving Gaby ($8) and class mare Alizee ($9) then round out the single-figure runners in the race.

After celebrating his maiden Melbourne Cup victory on the homebred hero Vow And Declare on Tuesday, veteran hoop Craig Williams is after another Cup week feature win partnering Loving Gaby from barrier three.

The Ciaron Maher & David Eustace-trained daughter of I Am Invincible makes her Flemington debut after her and Williams combined to score the upset Group 1 Ladbrokes Manikato Stakes (1200m) win at The Valley last time out.

The Manikato Stakes – VRC Sprint Classic double was last completed by Buffering (2013), but no three-year-old has won the latter since Fastnet Rock (2004).

Alizee meanwhile jumps from barrier two with Hugh Bowman in the saddle, the Godolphin-raced Sepoy mare out to atone for her last start seventh in The Everest.

See below for the full Darley Sprint Classic 2019 field and barriers, the full odds available here thanks to Ladbrokes.com.au.