Two Caulfield-trained fillies scored a dead heat in the 2019 Moonee Valley Fillies Classic results with nothing separating Fascino and La Falaise on the line in the mile showdown on Cox Plate Day. 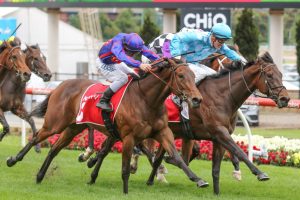 The 2019 Moonee Valley Fillies Classic resulted in a dead heat between La Falaise (outside) and Fascino (inside). Photo: Ultimate Racing Photos.

Following on from Friday night’s Ladbrokes Manikato Stakes win with fellow three-year-old filly Loving Gaby, Ciaron Maher & David Eustace were back in the winners’ stall at The Valley with Fascino but this time having to share top honours with Henry Dwyer and his filly La Falaise in the Group 2 $300,000 Moonee Valley Fillies Classic (1600m).

In third rounding out the MV Fillies Classic trifecta was the Chris Waller-trained Nudge who finished just ahead of the other Maher & Eustace-trained runner, Bonvinici, as less than a half-length separated the first four past the post.

It was a good line out in the opening Group status race on the Ladbrokes Cox Plate Day card with Charm Spirit filly Fascino, coming off the Group 2 Edward Manifold Stakes (1600m) second at Flemington, forced up from deep looking for a forward position.

As they found their positions the field was led around by the Godolphin-raced Asiago who controlled the pace up front.

Mid-race Aspect Ratio moved up three wide on the outside of the leader forcing the pace.

The field bunched on the tight turn into the short home straight with Fascino out deep chiming in to charge home before being found right on the line by the co-winner.

“How good’s the Valley,” Fascino’s co-trainer Maher said after the race.

“I hate dead heats, I hate getting beaten, but if I’m going to have a dead heat with anyone it’s Henry (Dwyer).

“When the cameraman went with me, I was off and celebrating…when I actually saw the horses over the line, I thought ‘Henry’s got it!’”

Dwyer said he was not confident he had won the Moonee Valley Fillies Classic looking at the photo, but knew his filly hadn’t lost either.

“I thought we’d won by a nose or dead-heated.”

A potential next-up spring option for La Falaise and Fascino is a start against the older mares at Flemington on VRC Derby Day (November 2) in the Group 1 $1 million Empire Rose Stakes (1600m), but Dwyer said he was keen for La Falaise to head for a spell.

Still, the bookies are keeping Fascino safe in their all-in 2019 VRC Oaks odds – available here – with the filly quoted at $14 through Ladbrokes.com.au.