Peter & Paul Snowden’s progressive colt Cosmic Force will race onto the 2019 Coolmore Stud Stakes at Flemington on Derby Day after a brilliant win in the Group 2 $300,000 Roman Consul Stakes (1200m). 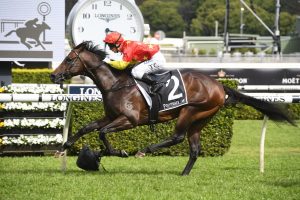 Co-trainer Paul Snowden confirmed plans to target a run down the famous Flemington ‘Straight Six’ on November 2 in the Group 1 $1.5 million Coolmore Stud Stakes (1200m) with Deep Field three-year-old Cosmic Force who was back to winning form at Randwick on Spring Champion Stakes Day.

“The Coolmore next run,” he said.

“No doubt a lot of these horses will be meeting each other again in three weeks. Just need to keep him ticking over.

“It’s unknown (the straight) but he’s a better horse with a sit I think.

“We did attack that race today to sit in the one by one.

“He jumped so well we gave that option to Tim (Clark) to roll forward and use his speed.

“Once he harnesses that nervous energy we’ll see a better performance.”

A bargain buy at the Inglis sales for just $180,000, Cosmic Force is now a two-time Group winner having also taken out the Group 3 Pago Pago Stakes at Rosehill during the autumn.

After a Golden Slipper eighth, he returned running a narrow first-up second in the Listed Heritage Stakes (1100m) behind Standout before turning the tables in the Roman Consul Stakes results.

Jockey Tim Clark replaced James McDonald on the $2.80 favourite in the Roman Consul Stakes and jumped away brilliantly from the barriers aboard Cosmic Force taking him straight to the front.

Leading into the straight, Cosmic Force was joined on the run home by Dirty Work before the challenger dropped off.

The Exceed And Excel colt just couldn’t get there in time however and on the line Cosmic Force had 1.3 lengths to spare over Standout ($8), while the Godolphin-raced Group 1 ATC Sires’ Produce Stakes winner Microphone ($2.90) returned with a first-up third in the event.

“Showed good speed today, I spoke to Peter (Snowden) this morning and he just left it up to me,” Clark said after the win.

“Ideally would have loved to have lobbed one-one or with a bit of cover.

“I just rode him like the best horse, I came and galloped him Tuesday morning and he went like a jet, I was pretty confident today.

“If you look at his form, he’s a horse that improved with every run last preparation.

“I knew the deeper into his preparation, the better he was going to be.

“Wasn’t ideally suited leading, I think he’ll be a better horse with cover and something to chase.

“He just showed he’s got a bit of class about him, an important win for him.

“He’s a group winning colt as a two and three-year-old now, so if he can knock a big one, he’s worth plenty.”

It was an impressive effort from the winner who flew from the gates and looked so professional throughout in the lead.

Cosmic Force also looks to have improvement to come heading towards his Group 1 target over the Melbourne Cup Carnival.

He will now attempt to do the Roman Consul – Coolmore Stud Stakes double recently achieved by both Zoustar (2013) and Brazen Beau (2014).

Cosmic Force will be out to complete the Roman Consul – Coolmore Stud Stakes double last achieved by Brazen Beau (2014) Bet now with Ladbrokes.com.au

The latest all-in 2019 Coolmore Stud Stakes odds at Ladbrokes.com.au have the Golden Rose winner Bivouac as the $4.40 favourite.

Cosmic Force and Microphone are both at $8 in pre-field Coolmore Stud Stakes betting, available here.