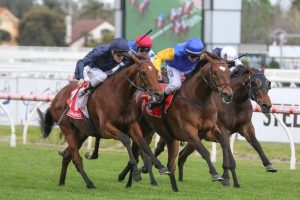 Cape Of Good Hope is into the 2019 Ladbrokes Cox Plate mix after winning the Ladbrokes Stakes in an upset. Photo: Ultimate Racing Photos.

It looks one of the most open editions of the iconic Group 1 $5 million Ladbrokes Cox Plate (2040m) at The Valley on October 26 with yet another horse putting their hand up to fill the gap left by historic four-time winner Winx.

He got into a hopeless position three back and three wide towards the tail during the run and only managed to finish fourth as the beaten $2.05 favourite in the upset Ladbrokes Stakes results.

It was a thrilling photo finish between two $21 chances after Gailo Chop took the lead in the Ladbrokes Stakes and lead the field around after his brilliant jump from the inside alley.

The Liam Howley-trained second favourite Homesman was also up on the speed throughout.

Gailo Chop eased the speed at the 1000m and led into the turn, while Avilius was second last cornering onto the straight.

All eyes went to the outside over the final furlong with Black Heart Bart fresh off his upset 100/1 win in the Underwood Stakes over Homesman came flying home.

Just when it looked like another Group 1 for the veteran, the impeccably bred Cape Of Good Hope got out late and drove through the line having gotten a lovely cart into the race.

It was a brilliant ride from jockey Mark Zahra who was impressed with the way the galloper finished off his Australian race debut.

“Obviously he’s not a bad horse.

“He was able to be strong all the way to the line.”

Rounding out the Ladbrokes Stakes trifecta in an extra boost for the winning training trio of David & Ben Hayes and Tom Dabernig, Harlem ($26) finished one and a half lengths back in third in his first top three finish since winning the Group 1 Australian Cup (2000m) back in March.

A four-year-old son of Galileo from Hveger, Cape Of Good Hope was a huge financial investment for the Lindsay Park operation led by Hall of Famer David Hayes who has him on track for the Cox Plate next start.

“We’ve never been more happy with a horse…he looks like a true weight for age horse.

“We copied the Criterion program and it paid off again.”

Criterion came back to Australia off an international campaign in 2015 to win the Caulfield Stakes first-up before a second to Winx in that year’s Cox Plate and next-up third behind Darren Weir’s triple-figure winner Prince Of Penzance in the Melbourne Cup.

“We’ll keep him exactly the same going into the Cox Plate.

“He’s got probably one of the better pedigrees in the world so we thought the Cox Plate and the Mackinnon were his two main aims and this was a nice warm up race.

All-in Cox Plate odds at race sponsor Ladbrokes.com.au on Cape Of Good Hope have been slashed from $51 to $8, while Harlem has also firmed notably in from $151 to $34.