The Chosen One has secured a slot in Saturday week’s $5 million Caulfield Cup for Kiwi trainers Murray Baker & Andrew Forsman after a strong win in the Group 2 $400,000 Ladbrokes Herbert Power Stakes (2400m). 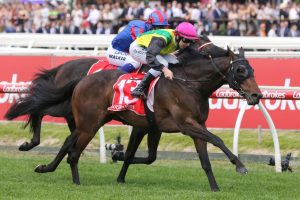 The Chosen One is into the 2019 Caulfield Cup field after winning the Ladbrokes Herbert Power Stakes. Photo: Ultimate Racing Photos.

A four-year-old son of Savabeel, the entire atoned for his disappointing run second-up on September 29 when racing flat to finish ninth behind shock winner Black Heart Bart in the Group 1 Underwood Stakes (1800m).

Coming back after that weight-for-age run to the handicap conditions of the Herbert Power Stakes, the entire was given a lovely patient ride by Damian Lane who continued associations with the New Zealand visitor this spring.

Previously 30th on the order of entry for the Group 1 $5 million Caulfield Cup (2400m) next weekend back at the track and distance, The Chosen One is now guaranteed a start in the classic chasing the double last completed by Master O’Reilly (2007).

The Chosen One will look to do the Herbert Power – Caulfield Cup double last completed by Master O’Reilly (2007) Bet now with Ladbrokes.com.au

“Every bit of work he’s done he seems to have thrived since.

“I knew switching him off was going to be the key with the blinkers…I was always going to ride him conservative.”

With the blinkers back on, The Chosen One settled back towards the tail-end of the field that was led around by new favourite Haky after the at-the-gates scratching of Steel Prince.

Steel Prince just got his leg caught in the back of the barriers seconds before the jump suffering a nasty gash that forced him out of the race.

Haky set a genuine pace up front with the field strung out early before the pacemaker faded at the 600m and a wall of horses started to come with their runs.

Coming right down the outside was The Chosen One ($5.50) who went on to defeat last year’s third placegetter Prince Of Arran ($8.50) from the UK stalbes of Charlie Fellowes.

Sully ($9.50) then rounded out the Herbert Power Stakes trifecta holding for third after an on-speed run throughout.

“It was a good win he was a long way back he picked them up and came the widest,” co-trainer Baker said post-victory.

“He was dropping back (weight) in the handicap, I think it suited him.

“The speed was on. He saw out the trip, which is the main thing.

“He’s into the Caulfield cup now.

“I think he’s an improving horse he hasn’t had a lot of racing and I’d hoped that he’d go on with it.”

The Chosen One has subsequently firmed in pre-field 2019 Caulfield Cup odds at Ladbrokes.com.au from $61 into $14.