An impressive in in Rosehill’s Listed $140,000 The Rosebud (1100m) from the Gai Waterhouse & Adrian Bott-trained colt Dawn Passage has the talented youngster on the right track for a 2019 Golden Rose bid this spring. 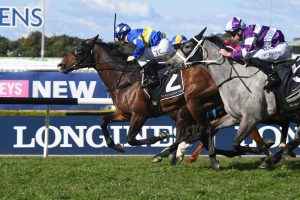 Having his first run as a three-year-old, the son of Dawn Approach celebrated his second victory at career start number three with an impressive late win in The Rosebud on Missile Stakes Day.

Tim Clark was aboard the bay who drew out in gate eight of nine and, as has become his pattern on race day, settled towards the rear of the field.

Dawn Passage was switched off second last as Cardiff led the field around setting a hectic pace that worked in favour of the backmarkers who made their charge in the closing stages.

Making up all the ground from the back, Dawn Passage ($4) got up for a spectacular win defeating the Bjorn Baker-trained Sweet Embrace Stakes placed filly Let It Pour ($21).

“From the draw I was a bit hamstrung on how I was going to ride him and would have loved to have been a pair closer and I really loved how he let down and savaged the line.

“I hadn’t felt that top quality (in him) but after today he definitely goes up a rung.

The $3.50 favourite Lucicello was also strong late, the Chris Waller-trained filly improving from dead last to run third and round out the trifecta.

“Massive rise in class and her performance shows she’s up to it,” Lucicello’s jockey Tommy Berry said.

“The winner just sprinted quicker than us on the day.”

Co-trainer Waterhouse was full of her typical post-win praise for Dawn Passage who she has pegged as a genuine winning hope in the Group 1 $1 million Golden Rose Stakes (1400m) back at the track on September 28.

“He’s an outstanding colt to do what he did today and have to make up the lengths he did,” she said.

“I thought it was an outstanding effort…you’ll see improvement as he gets over further.

“You’ll be seeing plenty of him.

“I think it’s exactly the right stepping stone for the Golden Rose.”