The two-year-old by Lonhro entered the race as an $8.00 chance with Ladbrokes, but looked every bit a Group 1 winner swooping upon the leaders to win from the outside.

Winning jockey Luke Currie fought hard to give his ride a winning chance, and was fortunate to find a great run into the race alongside Brooklyn Hustle. Lyre, who became the 10th filly to win the Blue Diamond Prelude and the Blue Diamond Stakes double, has also firmed from $26.00 into $6.00 for next month’s Group 1 Golden Slipper (1200m) at Rosehill on March 23. 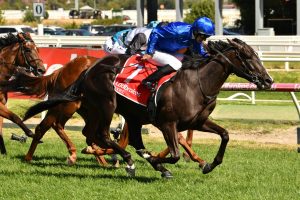 Lyre, above, has firmed in this year’s Golden Slipper market following a win in the Blue Diamond Stakes. Photo Credit: Ultimate Racing Photos.

“She jumped well, but knew there’d be speed, I didn’t want to rush her, probably ended up better than I’d hoped” Currie said after the race.

Lyre now hopes to become the sixth Blue Diamond Stakes winner to go on and win the Slipper. The most recent to accomplish the feat was Sepoy in 2011, while last year’s Blue Diamond winner Written By finished fourth.

“She’s home bred and they have a great system, and she came to us in beautiful condition, and it was just a case of developing her and keep improving into this race” Freedman said after claiming his first ever Blue Diamond win.

“She was great today, she probably got back a bit more than I wanted, but as they say, all is well that ends well.”