The Edward Cummings-trained super mare Duais gapped them in the 2022 Tancred Stakes results absolutely dominating a Group 1 field at Newcastle in the mile and a half feature on the back of her Australian Cup victory in Melbourne. 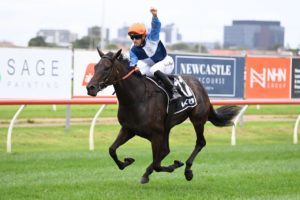 After last Saturday’s Rosehill meeting was abandoned due to the Heavy track conditions and rainfall, the last seven races on the card were rescheduled for Newcastle on Monday including the Group 1 $1.5 million Tancred Stakes (2400m).

It was a demolition job with the heavily-backed Shamus Award mare Duais far too good again saluting for the punters by a big margin.

She was last seen winning the Group 1 Australian Cup (2000m) by two lengths on Super Saturday at headquarters and improved again, relishing the step-up in distance and return to Sydney for the Tancred.

Josh Parr continued associations with the boom four-year-old who was devastating, coming from last to first to win the Tancred in runaway fashion.

“I just won the Tancred! Can you believe it? Oh my goodness. What a fantastic mare. You hear jockeys speak of having confidence in a horse and I’m starting to really respect that with this mare because she seems to just reassure me for every step of the way,” Parr said.

“Her turn of foot at the backend of a mile-and-a-half is just incredible and she handled them quite easily.

“I was very aware that going into today to pay respect to a couple of those hard-headed geldings and the stallion obviously; not to give them too much of a start.

“We swung down there by the 1000m and the half-mile and moves started to happen – the race really lit up. She just assured me that we are ok – I could sit there and be patient, and when I let her go, she put pay to them really quickly, similar to what she did at Flemington.

“No doubt about it. She’s the most talented horse I’ve sat upon, she’s remarkable. You guys have seen her plenty of times now, she’s not gross in size but the power her stride has is incredible.”

Having settled right back off the speed trailing, Duais ($2.40F) produced an incredible late sprint on to charge to the line three and a half-lengths clear of the brave Joe Pride-trained runner-up Stockman ($20) coming off a Group 3 Sky High Stakes win at Rosehill from March 12.

“She is a very talented filly, there is no doubt about that. I must admit, getting to the 1000m mark I saw Josh (Parr) just starting to niggle her along, she had switched off a little too well,” Cummings told the media post-race.

“Even as Stockman started moving up three and four wide, I was talking to Alex, my right-hand man, and he was like, ‘çome on Joshy, what are you doing mate, it’s time to get going’.

“She is a very special filly.”

In a distant third over four lengths beaten to complete the Tancred Stakes trifecta was the Murray Baker & Andrew Forsman-trained Kiwi The Chosen One ($13) in an improved effort on his 11th in the same race last autumn.

Angel Of Truth lead the Tancred Stakes field around but was over-racing in front, mouth open with the blinkers on.

Nothing on-speed featured in the finish with Angel Of Truth dropping off to run fifth, just behind the Australian Cup runner-up Think It Over in fourth who got shuffled back in a crucial stage on the home straight.

Duais meanwhile was last coming to the turn, while Stockman came four-deep around the bend after his hoop Sam Clipperton began a move from the back coming down the side.

Once the favourite shot clear inside the 200m, it was all over, the champion mare now with options galore looking ahead to the rest of the autumn as well as the spring.

Cummings now faces a decision on whether to drop her back to 2000m for the Group 1 $4 million Queen Elizabeth Stakes or stretch her out to two miles for the Group 1 $2 million Sydney Cup (3200m) both run Saturday week, April 9, on Day 2 of Randwick’s The Championships.

“She’d have run a mile-and-a half in the Australian Cup and it would have been a gap job like you just saw. The world is her oyster at the moment,” Cummings said.

“What we do next is still up in the air, but on the ease of that win, you’d have to say she’s got at least one more (run) in her and then she can take her pick in the spring.

“It’s definitely a consideration (going up to 3200m for the Sydney Cup). I think on the strength of that win she will run it out, no dramas.”

“Easily (you could also drop her back to 2000m for the Queen Elizabeth).

“We haven’t changed much of her work, she is just a natural athlete, you can do whatever you like with her.”

Duais is into $6 in all-in 2022 Queen Elizabeth Stakes betting at Ladbrokes.com.au – available in full here – after firming in from $11.

Futures Sydney Cup 2022 odds on the mare now have her as the $4 favourite and can be found in full here.