A capacity field is set for the richest juvenile’s race in the world with a star-studded line-up of two-year-olds gathered for Saturday’s Group 1 $5 million 2022 Golden Slipper Stakes (1200m) at Rosehill Gardens. 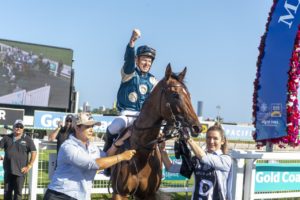 Seven colts and nine fillies face off in this year’s Golden Slipper field prior to any scratchings giving the girls the upper hand in both numbers and betting.

Throughout history 28 fillies have beaten home the boys in the event, most recently Kiamichi (2019), and it is the undefeated Ciaron Maher & David Eustace-trained Coolangatta tipped to be the next this autumn.

The brilliant daughter of Written Tycoon is three-from-three and is already twice proven over the six furlongs ahead of the Slipper where James McDonald will ride.

She is first-up in the Golden Slipper field not having raced since her narrow win as the odds-on fancy at the Gold Coast in mid-January’s $2 million Magic Millions 2YO Classic (1200m).

While three Magic Millions Classic winners have gone on to win the Golden Slipper, history will be made on Saturday should Coolangatta win as none have done so without another run in between.

“I have to admit I was slightly concerned about going in without a run but having her with that stable I know she’ll be right,” part-owner Ozzie Kheir told Racing.com.

“They have shown they can do things like this with Hitotsu so we’re looking forward to getting there on Saturday and seeing what she can do.”

The danger occupying the second line of markets is the Gary Portelli-trained Sejardan, a class Sebring colt who has won three of his four starts to date and who will have Jason Collett aboard in the big one.

His latest was on a Heavy (10) at Randwick in the Group 2 Todman Stakes (1200m), with the aforementioned Farnan the latest to complete the double Sejardan is out to emulate on Saturday.

The place-getters out of the Todman were the Gerald Ryan & Sterling Alexiou-trained Boyfriend (2nd) and the Joe Pride-trained Shalatin (3rd).

Shalatin has made the field and will be ridden by Nash Rawiller, the colt looking for his first victory at career start number five.

Portelli is after his second Golden Slipper after his 2017 win with She Will Reign and also saddles-up flying Rebel Dane filly Fireburn with Brenton Avdulla in the saddle.

Three-from-three over the 1200m, the progressive bay best handled the mud track at Randwick back on February 26 in her latest start saluting in the Group 2 Sweet Embrace Stakes (1200m).

The other best fancied filly in the mix is Russian Conquest, a beautifully-bred daughter of Russian Revolution prepared by Peter & Paul Snowden.

Russian Conquest, who will have last year’s winning jockey Tommy Berry aboard in the grand final, has form around Coolangatta having been beaten narrowly when runner-up in the Magic Millions Classic before her last start fourth as the beaten favourite in the Group 2 Reisling Stakes (1200m) on March 5.

The Mark Newnham-trained Shalaa filly Seven Veils was impressive in her Reisling Stakes upset second-up breaking her maiden status and is at an attractive double-figure price in the Golden Slipper odds.

Estijaab (2018) was the last filly to complete the Reisling Stakes – Golden Slipper double.

The other best out of the Reisling in the Golden Slipper this year is Godolphin third place-getter Ojai.

Another last start winning filly with genuine claims at the $5 million is the Anthony Cummings-trained She’s Extreme to be ridden by Brett Prebble.

The chestnut daughter of Extreme Choice won third-up at Rosehill last Saturday recording an easy victory in the Group 3 Magic Night Stakes (1200m) to earn her spot in the Golden Slipper Stakes field.

Since Bounding Away (1986) just two Magic Night Stakes winning fillies have backed-up to win the Slipper: Bint Marscay (1993) and Kiamichi (2019).

Prior to her last start win, She’s Extreme was second in the Sweet Embrace franking the Fireburn form ahead of their rematch.

Like Coolangatta, the Kacy Fogden-trained Snitzel colt Best Of Bordeaux is looking to remain unbeaten in the Slipper.

The dual Rosehill winner took out the Group 3 Canonbury Stakes (1100m) by nearly five lengths on debut in late January and was last seen saluting at a value price in the Group 2 Silver Slipper Stakes (1100m) back on February 19.

Other notable Slipper hopes this season include Rubick colt Jacquinot who ran third in the Blue Diamond last time out and last Sunday’s Group 3 Black Opal Stakes winning filly out of Canberra Queen Of The Ball.

The 2022 Golden Slipper Barrier Draw took place on Tuesday morning shortly after the release of the field with Coolangatta drawing out wide in gate 14.

Click here to read more on the Golden Slipper Barriers in 2022.