Inaugural $2 million The Invitation winner in Sydney last weekend Icebath heads south to Flemington on the quick back-up to take on Mr Brightside in the Group 1 $2 million Kennedy Cantala (1600m). 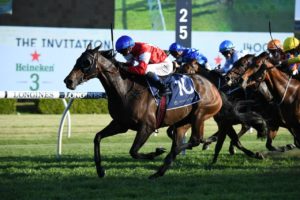 Victoria Derby Day kicks off the Melbourne Cup Carnival on Saturday and the 2021 Kennedy Cantala is one of four Group 1s on the card.

The up-and-comer chases a seventh consecutive wins having worked his way through the grades and is proving an outstanding miler.

He is five-from-five over the 1600m ahead of his acid test in the Cantala on Saturday following a big 2.25 length win at Ballarat last time out in the Listed Seymour Cup (1600m).

The form out of that race was franked by the fifth-placed Just Folk on Cox Plate Day with their win in the Group 2 Crystal Mile (1600m) at The Valley.

Mr Brightside now gets his chance in an even better race carrying just 52kg from an ideal barrier six draw with Craig Williams in the saddle.

The latest Kennedy Cantala odds at Ladbrokes.com.au have the favourite at a firm $4.40 quote to win the penultimate event on the Derby Day card.

Brad Widdup’s Sacred Falls mare Icebath meanwhile is at a generous quote of $10 following her solid victory against her own kind at Randwick last Saturday in The Invitation (1400m).

She carted 57kg from the outside barrier (12 of 12) for a one and a quarter length victory and presents fit on the quick back-up.

Drawn the extreme outside again (16 of 16), Icebath’s barrier woes may not have ended but she comes right back in weight to 53.5kg and has last year’s Melbourne Cup winning hoop Jye McNeil in the saddle.

The Archie Alexander-trained Chaillot ($8), Chris Waller’s early market mover Aramayo ($9 into $8) and the Waterhouse/Bott galloper Riodini ($9.50) are the other chances at single-figures along with Mr Brightside in Kennedy Cantala betting.

Testa Rossa mare Chaillot is three from five at Flemington.

She was fourth under a length off Shout The Bar on this day 12 months ago in the Group 1 Empire Rose Stakes (1600m) in one of her best performances.

First-up on Underwood Stakes Day at Sandown she was impressive fresh defeating Begood Toya Mother in the Listed Testa Rossa Stakes (1300m) and gets her chance at elite level her second-up.

Waller took out last year’s Kennedy Cantala with Yulong Prince for his fourth win in the event and returns on Saturday saddling-up the ultra-consistent Aramayo.

The six-year-old son of Poet’s Voice has had four runs at HQ without a top three finish, but there is early money for that to change on Saturday.

He has been racing exclusively in season this campaign and has run in the money in all three of his lead-up runs including behind Zaaki first-up in the Group 2 Tramway Stakes (1400m).

Third in the Bill Ritchie at the same track and distance after that, he was last seen running a devastatingly close second to Golden Eagle hopeful Private Eye in the Group 1 Epsom Handicap (1600m) and is out to frank the Sydney form lines in Melbourne this weekend.

Riodini has confirmed Melbourne Cup jockey Rachel King in the saddle, the New Zealand-bred Proisir gelding having run second to Verry Elleegant in the Group 1 George Main Stakes before his disappointing 11th from out wide in the Epsom.