The James Cummings-trained Paulele made it three-from-three at the Randwick track with a dominant first-up win in the 2021 The Rosebud results ahead of a potential Group 1 Golden Rose target this spring. 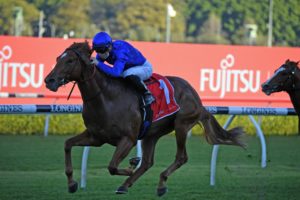 Paulele was impressive winning the 2021 The Rosebud first-up at Randwick for Godolphin. Photo: Steve Hart.

Hot favourite in an excellent edition of the $150,000 Listed The Rosebud (1100m) was the rails-drawn Snitzel colt Remarque for Team Hawkes also resuming in the event.

The heavily-backed favourite however had zero luck, getting stopped in his tracks just when he was winding-up for his run home, the galloper squeezed out the back before finishing a luckless third.

Still, it would have made for an interesting race should the top elect have got a clear run and he was far from a certainty beaten based on the ease of which Paulele managed to take advantage of his position carrying the 59kg topweight to a two and a half-length win.

“He is a lovely colt and he’s blessed with a wonderful turn of foot,” Cummings told Sky Thoroughbred Central after the win.

Extending his record to four wins from six starts, The Rosebud winner was racing for the first time since his equally dominant two and a half-length victory on a Soft (7) track in the Group 3 Kindergarten Stakes (1000m) back in April.

“He showed that sort of speed on top of the ground after doing so well on a rain-affected track in the Kindergarten,” Cummings added.

Paulele had had just the one soft trial at Hawkesbury when third in an 800m hit-out since, jockey James McDonald coming aboard for The Rosebud ride.

It was the previously undefeated filly Sky Command leading The Rosebud field around, and she held the lead turning for home.

Remarque got stuck in a tricky spot after straightening and never looked a chance, while McDonald flew home down the outside in the clear with a sweeping run aboard the eventual winner.

Paulele hit the front 200m out from the lead and was off and gone going on to defeat the Gai Waterhouse & Adrian Bott-trained Snitzel colt In The Congo who got up the inside for second after racing up on the speed in third throughout and battled on well looking better suited to further.

“He’ll be even better suited in the San Domenico in a few weeks’ time,” the Godolphin trainer said.

His performance there will determine subsequent targets, Cummings describing him as a “fast colt” unlikely to extend out further than 1400m.

“We think he’s a fast colt, I wouldn’t be getting carried away about expecting him to run a mile (1600m),” he said.

“We have discussed various targets we might have in mind and I think the key for this colt will be picking up the right races on the way through.

“The San Domenico is certainly looming large as a very suitable target second-up for him.

“Remarque looks a beautiful horse…no doubt we’ll meet that horse and others of that calibre in the San Domenico.

“But Paulele has developed a beautiful record and he’s got a little bit of upside too.”

A potential Group 1 aim for the galloper is the $1 million Golden Rose Stakes (1400m) on September 25 at Rosehill.

All-in 2021 Golden Rose odds at Ladbrokes.com.au on Paulele have firmed in from $34 to $17 and are available in full here.