The rescheduled Golden Slipper Stakes 2021 showdown takes place at Rosehill Gardens on Saturday and there has been a tickle of money coming for the undefeated John Sargent-trained filly Four Moves Ahead to beat home the boys in the world’s richest race for two-year-olds. 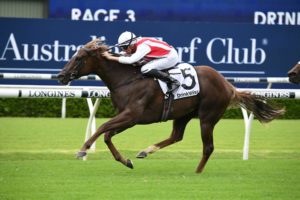 After last Saturday’s washout, the postponed Group 1 $3.5 million Longines Golden Slipper (1200m) runs this weekend on a likely Heavy track with conditions improving without any further rainfall in Sydney.

The original Golden Slipper field stood from seven days earlier, but there’s been an early scratching with the Chris Waller-trained O’President (8) withdrawn on Thursday due to an elevated temperature.

One of the early Golden Slipper market movers into $5.50 through Ladbrokes.com.au, Four Moves Ahead, now comes into barrier nine with Nash Rawiller retaining the ride on the Snitzel filly.

Four Moves Ahead is out to be the fourth filly in five years to salute in the Slipper following the recent victories by She Will Reign (2017), Estijaab (2018) and Kiamichi (2019).

After a winning debut by nearly three lengths over 1150m on a Heavy (8) at the Kensington track in early January, Four Moves Ahead stepped-up in grade in late February saluting in the Group 2 Sweet Embrace Stakes (1200m).

She’s been kept fresh since, is proven in the wet and at the distance but does need to go to another level in an excellent edition of the Golden Slipper.

Heading the Golden Slipper betting markets at $3.60 and firming is the Mick Price & Michael Kent Jnr-trained Profiteer drawn a treat in gate five with Hugh Bowman to ride.

The classy young Capitalist colt won his two career openers before a last start second as the beaten odds-on favourite on March 6 in the Group 2 Todman Stakes (1200m) behind Anamoe.

Prior to that however he was brilliant with a five-length victory in the Inglis Millennium and there’s money to suggest he can return to that form here and atone for his last start loss where he over-raced throughout.

The danger at $4.60 is another youngster looking to make up for their first loss last time out, the Richard & Michael Freedman-trained Stay Inside.

After back-to-back Randwick wins to kick off his career in the summer, including the Pierro Plate by four lengths on a Soft (7), Stay Inside ran fourth in the Todman Stakes contested on a Good (4).

He was away awkward last start and had a luckless run before an enormous effort late behind Anamoe who is at $17 for Saturday, so should appreciate the give back in the ground on the weekend as a definite winning home from a good gate (3).

The last of the single-figure fancies and the value punt in this season’s Golden Slipper field is the returning Group 1 Neds Blue Diamond Stakes champion, Victorian raider Artorius.

The talented Anthony & Sam Freedman-trained Flying Artie colt needs to tick a number of boxes being unraced outside of Melbourne and yet to run on a wet track, but he looked good in a recent Randwick trial earlier in the month.

Luke Currie, despite some questions about how he rode the horse home in the Blue Diamond win, retains the ride and gets the chance to do the coveted interstate Diamond – Slipper double.