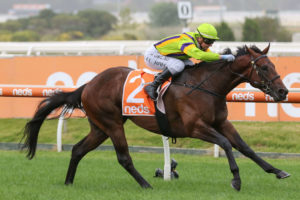 One of the juvenile feature races of the year, the 2021 Blue Diamond Stakes is scheduled for Caulfield on Saturday the 20th of February and all-in markets on the event are led by Ciaron Maher & David Eustace’s impressive filly Enthaar.

She dominates futures Blue Diamond Stakes betting at $2.20 through Ladbrokes.com.au after making it two Group 3 victories from as many starts in last Saturday’s Chairman’s Stakes (1000m) at Caulfield.

This weekend, a fresh bunch of two-year-olds will look to move up the Blue Diamond Stakes betting markets with a victory in one of the two Prelude events held over 1100m.

Drawn mid-field in barrier seven with Damian Lane to ride, the James Cummings-trained daughter of Street Boss debuted at the track on January 23 and was ultra-impressive saluting by over three lengths in a handicap carrying 58kg.

She is down two kilos to 56kg this weekend and looks every chance to continue her winning ways.

A number of other fillies are under double-figures to win the Fillies’ Prelude including stablemate to the Blue Diamond favourite, the fellow Maher & Eustace-trained Decent Raine ($5.50).

John Allen is down to ride the Dissident filly from barrier two on the weekend as the classy chestnut looks to go one better than her close second at Gawler behind Brother’s Shadow on January 23.

While Dosh is a non-acceptor for the fillies’ event on the weekend, the Blue Diamond Preview winner from the boys’ equivalent race, General Beau, does contest the Group 3 $200,000 Neds Blue Diamond Prelude (C&G) on Saturday.

Another in-form type from the Ellerton & Zahra stable, the Brazen Beau colt has had three career starts for a strong record of two wins and a third.

After a successful Flemington debut over 900m last September, he improved on a second to Ingratiating in the Listed Maribyrnong Trial (1000m) from October when saluting in the Preview first-up last month.

He and star female hoop Jamie Kah combined for a half-length win that day and continue associations on Saturday in the Prelude drawn another nice barrier (3).

General Beau is the current $3.30 top elect in Blue Diamond Prelude betting on the colts and geldings, as the up-and-comer faces a number of the same rivals out of the Preview.

The biggest threat to General Beau completing the Preview – Prelude double however is tipped to be the Cindy Alderson-trained Jigsaw ($3.80) out in gate nine and coming via a different lead-up.

A nicely-bred Manhattan Rain colt, Jigsaw was eye-catching on debut at Geelong a month back saluting over 1135m by over three lengths and has Michael Walker in the saddle again.

The Godolphin Royal Blue are also looking to steal the colts and geldings Prelude with the well-backed Anamoe ($5) in gate four with Damien Oliver aboard the spring’s returning Listed Merson Cooper Stakes (1000m) winner from Sandown.