Flemington’s Cantala Stakes on Derby Day looks the ideal next-up target for Phillip Stokes’ gun galloper Mr Quickie who was back to his best fresh over the mile to take out the 2020 Toorak Handicap. 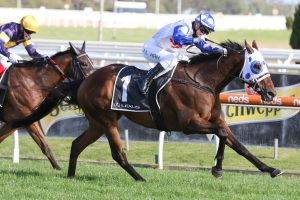 The last of four elite levels on the Caulfield Guineas Day card on Saturday, the Group 1 $500,000 Lexus Toorak Handicap (1600m) shaped-up as an open race and Shamus Award five-year-old Mr Quickie went out as a $21 outsider.

He was lumped the 59kg top weight as a proven Group 1 winner of the 2019 Queensland Derby, but had been winless since that Brisbane success over the mile and a half as a three-year-old.

Twice placed in Group 1 company since however, including two back in the Memsie Stakes behind The Everest-bound Behemoth, Mr Quickie came into the Toorak off a seventh to Russian Camelot in the Group 1 Underwood Stakes (1800m) at weight-for-age.

Relishing the drop back to a mile, he was given a brilliant ride by Jamie Kah who joined Michelle Payne as the other female hoop to win the Toorak Handicap.

“He’s just been doing a few things wrong this boy,” Kah, who had her first ride on Mr Quickie in the Group 1, said post-win.

“He’s such a talented horse on his day and they’ve found the trick to him just keeping him fresh.

It was Michael Moroney’s well-supported light-weight Buffalo River carrying just 53kg to lead the Toorak field around, while the favourite Junipal travelled midfield and Superstorm for Grant & Alana Williams was back second last in the run.

Jockey Craig Williams went for home on the front-runner Buffalo River at the 250m, but Mr Quickie was fast on the scene to wear him down despite giving away all the weight.

With the hefty kilos, the eventual winner took the lead with 150m to go and ran away for a gallant two length victory over Buffalo River ($4.80).

The on-fire William Pike, fresh from four earlier wins including the in the Caulfield Guineas on Ole Kirk and the Caulfield Stakes on the fellow Grant & Alana Williams-trained Arcadia Queen, rode another beautiful race to get Superstorm ($8) up from last to third up the inside.

It was all honours to Mr Quickie however who travelled sweetly behind the speed, got the gap on the straight and burst through for the big win.

Next-up the horse, who looks a more effective miler than stayer, could head to HQ on October 31 for the Group 1 $1.5 million Cantala Stakes (1600m).

All-in 2020 Cantala Stakes odds at Ladbrokes.com.au have Mr Quickie into $7 and are available in full here. 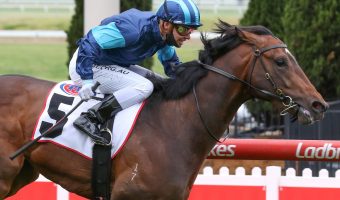 The punters have stayed with the Danny O’Brien-trained Russian Camelot in 2020...