It is a tight top half of the markets for Saturday’s Eye Liner Stakes 2020 at Ipswich with a number of hopefuls battling for favouritism including the current narrow top elect Boomsara. 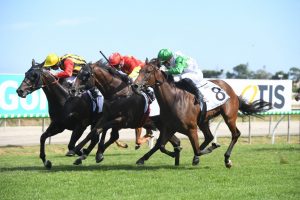 Munce won the Eye Liner Stakes as a jockey on Belltone in 2012 and this weekend chases his first victory in the event as a trainer with Boomsara who hasn’t won a race since his Magic Millions success in 2019.

First-up at Grafton on July 8 the horse ran an eye-catching fourth behind Signore Fox when only 1.6 lengths beaten in the Listed Ramornie Handicap (1200m) with 57kg and he should be fitter for the run coming back a half-kilo in weight.

The latest Eye Liner Stakes odds at Ladbrokes.com.au list Boomsara at $4.20 and he is followed very closely in the markets by the flying Mr Bellagio ($8.50) chasing a fourth win on the trot.

Prepared by this winter’s Stradbroke Handicap winning trainers Toby & Trent Edmonds, six-year-old O’Lonhro gelding Mr Bellagio was last seen saluting over 1400m in the wet at the Gold Coast on May 22 with a commanding five length success.

That followed two early wins on Good (4) tracks at the Gold Coast and Doomben respectively and he has been brought on fitness wise since with a Gold Coast trial on June 30.

Well weighted on the 54kg minimum this weekend, Mr Bellagio jumps from gate 12 with Robbie Fradd to ride the definite danger in the race.

Occupying the third line of Eye Liner Stakes betting at an equal $5.50 are then the Robert Heathcote-trained topweight Deep Image ($5.50) drawn the outside gate (14) and Pennino for the Sunshine Coast’s Darryl Hansen.

Testa Rossa six-year-old Deep Image is being well respected by the bookies despite his top weight and wide gate, the gelding back notably in grade off his 16th in the Group 1 Stradbroke Handicap (1400m).

True he goes up seven and a half kilos on his Stradbroke light weight, but this is a far easier assignment for the multiple Group placegetter and proven Black-Type winner who will also appreciate coming back to the 1200m sprint distance.

Heavy weights also have been a non-issue in the Eye Liner Stakes in recent years with five of the past seven champions carrying at least 59kg to victory including Man Booker (59kg) last year.

Pennino meanwhile was withdrawn from the Listed $125,000 Gai Waterhouse Classic (1350m) for the fillies and mares on the same card in favour of a run against the boys in the Eye Liner Stakes.

Rounding out the single-figure fancies at $9.50 is then Bandipur carrying 58.5kg.

Kelly Purdy’s Gold Coast-trained son of Commands races at Ipswich for the first time on the weekend looking to atone for his 10th in the Ramornie Handicap when only 2.3 lengths off the winner carrying 59kg.