Bjorn Baker’s always honest mare Irithea scored a deserving win in the Dark Jewel Classic 2020 results on Saturday with the feature race of the Scone Cup Carnival taking place at Rosehill Gardens due to COVID-19 restrictions. 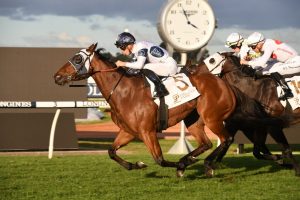 Baker was thrilled to take out this year’s Group 3 $160,000 Emirates Park Dark Jewel Classic (1400m) with one of the stable favourites Irithea, the six-year-old daughter of Snitzel enjoying her first win since the Group 3 Hawkesbury Crown (1300m) from April last year.

“I’ve always wanted to win the Emirates Park Dark Jewel Classic, I just didn’t think it would be at Rosehill,” Baker said post-race.

“Very exciting. She always puts her best effort in.

“She’s always thereabouts and she does it the tough way too.

“She’s got a great attitude. They’re good horses those Snitzels.”

Irithea came off a fourth in this year’s Hawkesbury Crown, which also ran at Rosehill Gardens this season, on ANZAC Day having been beaten just three-quarters of a length and was the big improver in the Dark Jewel Classic.

Ridden to victory in the handicap clash by Premiership-leading jockey James McDonald, Irithea crossed easily from her outside barrier (16) but didn’t get to control the race forced to settle second in the run behind the speedy Ready To Prophet.

The Gai Waterhouse & Adrian Bott-trained roughie Ready To Prophet ($61) was first out the gates and controlled the tempo up front with McDonald happy to take the sit on the eventual Dark Jewel Classic winner.

The front runner set a good galloper in the lead, a smart pace that suited on-pace runner Irithea.

Ready To Prophet moved well off the fence to lead into the straight but was quickly challenged by Irithea in the closing stages.

Eventually McDonald surged clear on Irithea who tackled the front runner, got to the lead and saluted for his third won of the day.

“She’s just a stunner really. She always gives her best.

“She’s a pleasure to ride, an absolute star.

“She dug deep and knew where the winning post was.”

John Thompson’s Foxwedge mare Into The Abyss snared second right on the post diving to defeat the brave pacemaker Ready To Prophet who held to round out the Dark Jewel Classic trifecta in third.

She may not have been able to control the race, but Irithea controlled the finish in the Dark Jewel Classic retaining her undefeated record at the track and distance.

“I thought it worked out really well today,” Baker admitted.

“When she can take a sit and they can roll along like that she’s at her best.”