A quick back-up into Saturday week’s Group 1 $700,000 Ranvet Stakes (2000m) on Golden Slipper Day could be on the cards for the Hawkes Racing-trained Master Of Wine following his powerhouse Sky High Stakes 2020 win. 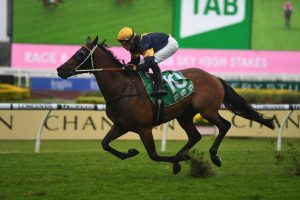 Master Of Wine could race again in the Ranvet Stakes after a runaway win in the 2020 Sky High Stakes. Photo: Steve Hart.

The German-bred Maxios five-year-old enjoyed his fourth consecutive win saluting for the punters with another dominant performance in the Group 3 $350,000 Sky High Stakes (2000m).

The punters came for the progressive stayer in a big way, Master Of Wine jumping the $2.20 top elect after winning over 1400m at the track on February 22 by 3.5 lengths first-up.

He had another big margin to spare over his rivals going up in distance on a Heavy-rated Rosehill track on Coolmore Classic Day.

Jockey Tommy Berry was thrilled with the horse’s efforts over the 2000m second-up in the wet, Master Of Wine coming away over the final furlong to defeat the Kris Lees-trained Sydney Cup-bound Mustajeer ($3.70) by 3.5 lengths.

“He makes it easy because he has nice tactical speed if you want to use it,” Berry said post-win.

“I got to say second up 2000m he was a little bit keen, they didn’t go all that quick, but when he got the split he picked up for me and I was able to hold him well into the straight.

“I’m glad I was able to do that, because he wasn’t at home on that Heavy track.

“I don’t think you are going to see Heavy tracks like this very often, when it rains during the day it just makes it very hard work.

“He’s a very good horse and it’s just a pleasure to be back on him.

“Considering he is second up 2000m on that sort of track he’s pretty clean winded, but any good horse is clean winded, that’s what makes them so good.

“He’s got the right team behind him, I’ve just got to stay with him now.

“We really need an Australian weight-for-age star to step up and say I’m the best going around, he’s won his last four now and while he is still far from the top, he’s slowly getting there.”

Following closely in third to round out the Sky High Stakes trifecta was the Peter & Paul Snowden-trained So You Think four-year-old Carif ($16) who just beat home Life Less Ordinary ($8.50).

Derby winner and proven mudlark, Angel Of Truth led the Sky High Stakes field around from lightweight Attention Run, while Berry drove right through along the rails on the short favourite Master Of Wine to settle third.

It was a bunched field approaching the turn, Angel Of Truth staying close to the inside to hold a narrow lead onto the straight before the challengers came.

Master Of Wine, right up the middle, hit the front 150m out from the line and despite finishing off well, Mustajeer was no match for the runaway winner.

Co-trainer Michael Hawkes said they would see how the horse pulled up before making a call to run in him next week’s Ranvet Stakes.

“He is pretty special. Obviously, he won first up very well. He gave him a really nice ride and he got the job done. He’s turning into a very serious horse,” he said.

“You don’t really know until you are proven on it. Obviously, he has gotten through Soft ground but Heavy is a different story and out there now is bottomless really.

“I’ve got to give Tommy credit. He gave him a really good ride. He probably wanted to get a little bit keen early stages, but Tommy locked him down pretty well and got him to travel.

“Probably the winning move was about the 600m when he pushed up between horses and when he got him into the clear it was all over.

“He may back up next week in the Ranvet. We will see how we go. It’s all up to him but he is going the right way and today’s run was pretty good.”

All-in Ranvet Stakes betting at Ladbrokes.com.au have Master Of Wine as the $5 second favourite behind European raider Addeybb ($3.60).