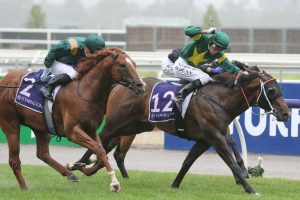 The Team Hawkes-trained colt is a beautifully bred son of Written Tycoon from Naturale and had the pedigree lines pointing to success in the Listed $140,000 Talindert Stakes (1100m).

A relation to All Too Hard who also won the Talindert Stakes on debut back in 2012, Ole Kirk also made a nice omen bet being a cousin of the mighty mare Black Caviar whose namesake race takes place later in the day.

Ole Kirk went out at a huge price in Talindert Stakes betting paying $34 through Ladbrokes.com.au, jockey Dwayne Dunn in the saddle of the very coltish youngster.

Despite some pre-race antics in the stable, the mischievous but very talented two-year-old looked far more professional once on the track.

“I think I got him cause no one else wanted to ride him early as a baby,” Dunn said post-race.

“He’s got all the attributes…he’s spent more time on two legs than four, but the talent’s always been there.

“He’s got a lot of energy, if you can use it the right way like we’ve seen today, he’s going to be a really good horse.”

Having had a nice piece of work down the famous Flemington straight through the week, Ole Kirk put it all together on race day.

Dunn had the sit in behind a number of others in the field early as Frederick The Dane set the pace.

Ole Kirk meanwhile was searching for a run 200m out having weaved his way through before the split presented and Dunn hit the button.

Showing all the qualities of a smart racehorse, the up-and-comer went through the gap pinging back his ears and lengthening to the line.

In the end he beat home Nitrous ($6.50) by a neck with Mildred ($6.50) the same distance back for third finishing off the tight Talindert Stakes trifecta.

“To be honest we just wanted to see how he ran and take it from there,” he said.

“There’s a stack more other races to come than just the one next week.”

Despite the stable’s reservations, the bookies have slashed the Blue Diamond Stakes price on Ole Kirk in from $151 to $51 through Ladbrokes.com.au.

Click here for the latest all-in Blue Diamond Stakes 2020 odds courtesy of Ladbrokes.com.au ahead of next week’s final acceptances.