Returning Manikato Stakes winning filly Loving Gaby is on the drift in Black Caviar Lightning 2020 betting for her tough first-up test against the brilliant Nature Strip this Saturday at Flemington. 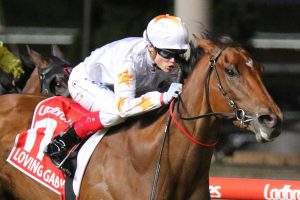 Loving Gaby is one of the single-figure fancies taking on the hot favourite in Saturday’s 2020 Black Caviar Lightning at Flemington. Photo: Ultimate Racing Photos.

One of those is the Ciaron Maher & David Eustace-trained daughter of I Am Invincible Loving Gaby.

The ultra-consistent filly has amassed over $1.68 million in prize money over her nine-start career to date finishing out of the top two just twice.

Incredibly she has raced in six elite level races already including her Group 1 Ladbrokes Manikato Stakes (1200m) victory at The Valley when carrying a lightweight to victory on October 25.

She backed-up for her Flemington debut on November 9 last spring in the Group 1 VRC Sprint Classic (1200m) but could only manage to cross three and a quarter-lengths back second behind the runaway winner Nature Strip.

On Saturday Loving Gaby races first-up out to defend a previously flawless record when resuming for her second encounter with Nature Strip at HQ.

Earlier in the week the filly opened at $5.50 in Black Caviar Lightning betting at Ladbrokes.com.au to become the first three-year-old winner of the weight-for-age classic since Fastnet Rock (2005).

Over 64 runnings of the Lightning eight fillies have been successful with Regimental Gal (2004) the latest.

Since then however she has eased out to $6 to turn the tables on her last start conqueror.

Nature Strip meanwhile is all the rage with the punters at $1.50 to kick off his autumn campaign with his fifth win from as many starts at the iconic straight track.

Chris Waller’s Flemington specialist couldn’t have been more impressive in the VRC Sprint Classic and is also an elite level winner over the 1000m having taken out Moonee Valley’s Group 1 Moir Stakes last September.

The Nicconi gelding has been brought on by Waller fitness wise with back-to-back Warwick Farm winning trials over 900m and is the deserving favourite.

The danger looking at the markets at $7 for the upset is the veteran Peter & Paul Snowden-trained Redzel.

A two-time winner of the world’s richest turf race, Redzel is out to atone for his last start eighth when failing to make it a hat-trick in Randwick’s The Everest (1200m) last October.

Two runs before that he defeated Nature Strip (4th) by two and three-quarter lengths in the Group 3 Concorde Stakes (1000m) when winning at set weights plus penalties.

Add to the fact Snitzel seven-year-old Redzel boasts plenty of 1000m form (10:5-4-0), his own Group 1 VRC Classic win from November of 2017 and his second to Redkirk Warrior in this race two years ago and there may not be as much separating him from the odds-on favourite as the markets suggest.