Promising two-year-old gelding Prime Star has taken out the $2 million Inglis Millennium (1100m) at Warwick Farm on Wednesday, saluting as a handy double-digit pop for punters.

The gelding by StarSpangledBanner went around at $18.00 odds with Ladbrokes.com.au, a quote Michael Freedman couldn’t quite work out.

There was plenty of pace in the race with Absolutely Foxy dictating from the front, but it was Prime Star who made up ground down to win by a head on the outside of second place-getter Bella Nipotina. 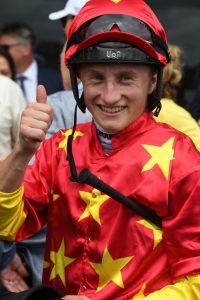 “I was a little surprised that he was as bigger odds today as they had him. I thought his form had been pretty sound,” the winning trainer said.

Jockey Tom Marquand rode Prime Star first-up at Gosford last month before Keagan Latham took over in Newcastle. Marquand said he had some doubts racing on a Heavy 9, but that he felt confident in his horses turn of foot out of the gate.

“I knew within about three strides. You know when the ground is this bad if they can’t jump and travel, you’re cooked from the word go. He jumped up into the bridle and he takes it all in his stride, unbelievable” Marquand said.

Prime Star was a $55,000 purchase by the Freedman stable and now looks to be one to follow. Freedman said he’s okay if his horse doesn’t win another race, but he will consider his options moving forward.

“We’ll have to rethink what we do with him from here. If he comes through here today okay, we’ll certainly look at some of the upcoming two-year-old races” Freedman said.

“We’re probably still a long way off getting into a Slipper or anything like that, but there’s lots of options for two-year-old’s outside of the Slipper, so if he goes home and has a good week we’ll reconsider.”

Complete 2020 Inglis Millenium Results can be viewed below.