Just seven sprinters will do battle in the Black Caviar Lightning 2020 field at Flemington this weekend with markets on the Group 1 led by Chris Waller’s short-distance star Nature Strip. 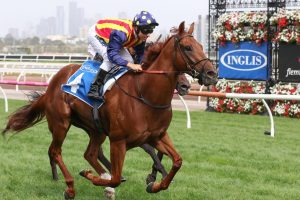 Drawn barrier five with jockey James McDonald back aboard, the Nicconi five-year-old is into a very conservative $1.40 in the updated Black Caviar Lightning odds at Ladbrokes.com.au to win the weight-for-age feature first-up.

A genuine Flemington straight track specialist, Nature Strip has won all four of his previous starts at the iconic track including last November’s Group 1 VRC Classic (1200m) by over three lengths during the Melbourne Cup Carnival.

He also boasts plenty of form over the shorter 1000m distance (9:6-1-0) including taking out the Group 1 Moir Stakes (1000m) at The Valley last September.

A brilliant three-year-old daughter of I Am Invincible, Loving Gaby gets in on just 53.5kg at WFA in her autumn carnival kick-off looking to turn the tables on Nature Strip.

She finished a distant second to him in the VRC Classic when carrying only 51.5kg to his 58.5kg on the back of her own elite level success in the Group 1 Ladbrokes Manikato Stakes (1200m) at Moonee Valley.

Facing a tough task against her last start conqueror, Loving Gaby is a noted first-up performer and is likely to finish in the money again.

Rounding out the single-figure fancies is the Peter & Paul Snowden-trained champion Redzel looking to add to his incredible $16 million in career prize money.

A seven-year-old son of Snitzel, he races for the first time since failing to make it a historic hat-trick of wins in the world’s richest turf race when eighth behind Waller’s gun three-year-old Yes Yes Yes in last year’s The Everest in Sydney.

Saturday marks the first Melbourne run by Redzel since his fifth to Santa Ana Lane in the 2018 VRC Classic, but in that year’s Black Caviar Lightning he was only beaten a nostril flare by Redkirk Warrior so cannot be discounted here once again.

Click here for the updated Black Caviar Lightning 2020 odds thanks to Ladbrokes.com.au.