Caulfield Cup winner and Japanese superstar Mer De Glace continues to fluctuate in Melbourne Cup betting ahead of the $7 million race that stops a nation on Tuesday.

Hisashi Shimizu’s five-year-old firmed all the way into $6.50 following Saturday’s barrier draw before drifting slightly on Monday back out to the $7.00 mark. Even so, the Japanese stayer remains the favourite in barrier two and looks extremely tough to beat as he looks to claim his seventh win on the trot.

Jockey Damian Lane will be in the saddle again after scouting the horse back in June. Lane rode Mer De Glace to a win in the Group 3 Naruo Kinen (2000m) at Hanshin and quickly convinced owners to make the trip to Australia. 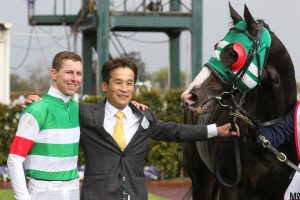 Mer De Glace lived up to the hype in the Caulfield Cup, blazing past a field of homegrown and international talent to win comfortably by a length.

Shimizu provided an update prior to Mer De Glace’s grand final run and started off by saying the horse is fit and firing for a step up in trip.

“He’s been well, nothing to be worried about. He’s started working straight away, he’s very well,” Shimizu told Racing.com through a translator on Monday.

The Caulfield has long been a steppingstone for top class stayers eyeing Australia’s grandest prize. Eleven horses have completed the Caulfield Cup-Melbourne Cup double, with Ethereal being the most recent to do so in 2001.

Shimizu went on to say that the Caulfield Cup was Mer De Glace’s main target but after showing so much promise and improvement in the run, the stable had no other choice but to look ahead to that one famous Tuesday in November.

Several pundits have knocked Mer De Glace’s chances in the Cup suggesting the step up in trip could prove too much. The stable have never ventured past the 2400m mark but Shimizu is feeling confident Lane can bring out the best in his horse.

“I’ve been asked this question a million times in the last few days” Shimizu said.

“It’s very hard to say, of course the horse has to just run to see how he handles it, but I believe in the horse and the jockey. He should be able to handle it.”

Tuesday’s race is as much a big deal for Shimizu as it is for Japanese racing as a whole. After Mer De Glace won the Caulfield Cup, Lys Gracieux backed up with a convincing win in the Cox Plate a week later.

Japan is now looking for a clean sweep of the Spring Carnival’s “Big 3” and although Shimizu said he’s feeling the pressure of his home country, he’s also very excited about the future for Japanese racing.

Japanese racing and clean sweep of the three biggest races of the Spring Carnival: “it feels like I’m carrying the Japanese flag. It is great that Japanese horses have been racing so well all over the world. Obviously, the Japanese quota is going up and improving every year and we have very good quality with thoroughbreds. I really don’t want to stop this moment for Japanese horses and hopefully we can get a good result for Japan.”