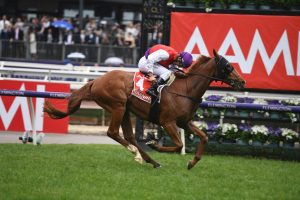 Earlier in the day Oliver broke the record of Melbourne Cup Carnival winning rides in the Group 2 Wakeful Stakes aboard Miami Bound.

He then surpassed his own record with his 74th victory and his sixth in Australia’s oldest classic, the Group 1 $1.5 million AAMI Victoria Derby (2500m).

Progressive Declaration Of War gelding Warning was a bargain buy for Freedman and produced a stylish win in the Derby putting 3.25 lengths on the runner-up, Puissance De Lune colt Southern Moon coming off the Geelong Classic second.

The Victoria Derby trifecta was completed by the Ken Keys-trained Moonee Valley Vase winner Soul Patch a further length back third on the quick back-up.

Two back Warning won the Listed Super Impose Stakes (1800m) by two lengths at Flemington before his lead-up second behind Thought Of That on Caulfield Cup Day in the Group 3 Ladbrokes Classic (2000m).

Pre-race plans were to ride Warning quietly in the Derby, but after the galloper began so well from his barrier 10 draw Oliver quickly changed tactics and allowed his mount to kick up on the pace out wide.

The Geelong Classic winner Long Jack went to the front to lead the field around, Warning doing the chasing a little keen early before settling in the one-one position and finally switching off for Oliver.

“He got there pretty easy. He was a little keen early but once I got him into the one-one position he had a little rest…I popped out three deep…let him build his momentum.

“I knew I had had such an economical run and I had a lot of confidence in him.

“I knew he could stay well and he’s such a clean-winded horse.

“It’s great to have a winner for the Freedys again…lovely to get a Derby for them.”

With 600m left to go they started to come for Long Jack with Warning moving up and Soul Patch, who had travelled sweetly saving all the ground fifth on the inside, getting off the fence at a crucial stage.

It was Warning who showed the best staying ability however with Southern Moon unable to chase him down, the Victoria Derby winner powering away and relishing the Soft-rated track at HQ.

Freedman was over the moon with the Victoria Derby 2019 results but was keeping a lid on potential plans to return in 12 months’ time for a shot at the 2020 Melbourne Cup with Warning.

“It’s a long way between the Derby and Melbourne Cup,” he said.

“But he’s very genuine. He’s got the perfect temperament for a stayer and he’s very honest. That’ll take him a long way.”