The make-up of this spring’s Melbourne Cup 2019 field is becoming clearer following a number of notable scratchings this week in the lead-up to the $8 million Flemington feature on Tuesday. 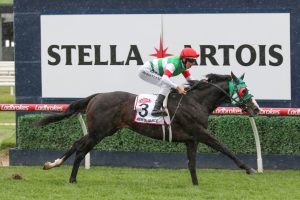 Caulfield Cup winner Mer De Glace is one of the best fancied of the 2019 Melbourne Cup horses for the two mile classic next Tuesday. Photo: Ultimate Racing Photos.

The ‘race that stops a nation’ lost two key international contenders on Wednesday night with the 2018 runner-up Marmelo and the Charlie Appleby-trained Dubai Gold Cup runner-up Ispolini for Godolphin withdrawn from the two-mile classic.

The two raiders were forced to withdraw by Racing Victoria officials after injury concerns were revealed during their CT scans earlier in the week.

On Thursday outsider Angel Of Truth for Kembla Grange trainer Gwenda Markwell along with English stayer Raheen House were also ruled out due to lameness.

RV stewards completed vet checks on the top 35 Melbourne Cup aspirants and the two Bendigo Cup flops from Wednesday – Angel Of Truth 11th and Raheen House 13th – were not passed fit to run.

The final chance to make the 24-horse Melbourne Cup field is offered to the Group 3 $300,000 Lexus Hotham Stakes (2500m) winner on Derby Day this Saturday.

Following the Cup scratchings and subsequent reshuffle to the order of entry, four of the Hotham Stakes runners are inside the top 24 for the big race.

Neufbosc, Sound, The Chosen One and Downdraft sit 21st – 24th on the Melbourne Cup ballot order respectively with connections now weighing up whether to run them three days out from the classic or hold off.

Current favourite in pre-field Melbourne Cup betting at Ladbrokes.com.au is Constantinople ($7.50), the Lindsay Park import getting in on just 52.5kg.

The Galileo four-year-old debuted down under in the Group 1 Caulfield Cup (2400m) and finished just 1.4 lengths back fourth behind the Japanese raider Mer De Glace in an eye-catching run.

Jockey Luke Nolen rode Constantinople first-up but he has been replaced on the Melbourne Cup favourite by Hong Kong star Joao Moreira.

Glen Boss had earlier secured the prized mount before his careless riding suspension last weekend that has him in doubt of a shot at a fourth Melbourne Cup success following his historic three-peat aboard Makybe Diva (2003-05).

This year will be the fourth time the ‘Magic Man’ Moreira rides in a Melbourne Cup, his latest attempt being aboard Heartbreak City who ran second to Almandin beaten narrowly in 2016.

The Caulfield Cup winner Mer De Glace is at Melbourne Cup odds of $8.50 to complete the Spring Cups’ double for the first time since Ethereal (2001).

The reigning Melbourne Cup winner is Cross Counter, Appleby’s English galloper chasing his first victory since the Dubai Gold Cup over the two miles back in March.

Trainer Chris Waller of Winx fame has two confirmed starters inside the Top 24 on the order of entry, along with Patrick Erin (25th) chasing the start via the Hotham Stakes on Saturday.

Waller withdrew stablemate Youngstar from the Hotham after the mare moved up to 20th on the ballot, while last year’s Melbourne Cup fourth placegetter Finche looks the stable’s best chance paying $11 after the Caulfield Cup fifth last time out.

Finche finished fourth in last year’s Melbourne Cup results at just his second start down under from barrier 15 and shapes-up as a much better chance 12 months on with Kerrin McEvoy confirmed to ride.

The Aidan O’Brien-trained Irish galloper Il Paradiso and Danny O’Brien’s Caulfield Cup runner-up Vow And Declare at an equal $12 are the other best fancied Melbourne Cup chances before final acceptances.

Surprise Baby meanwhile is the feel-good story in this year’s Melbourne Cup race.

Paul Preusker’s son of 2009 Melbourne Cup champion Shocking is bred to win and secured a start with his Group 3 The Bart Cummings (2025m) victory on October 5.

See below for the Top 24 Melbourne Cup 2019 Horses that will face off in the field barring injury or change of plans.

Only Downdraft from the 2017 Melbourne Cup winning stables of Joseph O’Brien could miss out on a start sitting 24th on the order of entry.

The horse is favourite for the Lexus Hotham Stakes on Saturday but could be pushed out of the race should a horse below him on the order of entry win.