The bid for Japan to win two of the ‘Big 3’ spring majors on the trot suffered a blow when well-fancied raider Lys Gracieux drew barrier 15 in the 2019 Ladbrokes Cox Plate field. 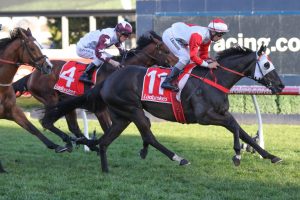 The Valley will light-up on Saturday with the iconic $5 million Group 1 Ladbrokes Cox Plate (2040m) running for the first time in five years without Chris Waller’s historic four-time champion Winx.

It shapes up as a much more open affair in the weight-for-age classic in 2019, especially post Tuesday’s Cox Plate barrier draw.

A last start winner of a Group 1 over 2200m with Australia’s Damian Lane in the saddle back in June in Japan, the ultra-consistent Heart’s Cry six-year-old remains favourite in Cox Plate betting at race sponsor Ladbrokes.com.au despite a wide barrier.

A capacity field of 14 starters plus four emergencies with two-time Cox Plate placegetter Humidor relegated to first emergency in a surprise omission from the final field.

The punters’ pick Lys Gracieux drew barrier 15, but could start from as good as 11 if all the emergencies fail to gain a start having drawn between 1 – 14.

Lane partnered Mer De Glace to victory in the Caulfield Cup results and is also in the saddle of the Cox Plate favourite this weekend.

Lys Gracieux is at $3.70 in the latest Cox Plate odds online and stands to win an additional $2 million Ladbrokes Cox Plate bonus having won the Group 1 Kinen back in Japan.

Humidor meanwhile is at $34 to make the field and improve on his two placings behind super mare Winx when runner-up in 2017 and third past the post in last year’s Cox Plate trifecta.

She won the Group 2 P.B. Lawrence Stakes (1400m) first-up at Caulfield before a Group 1 Makybe Diva Stakes (1600m) second ahead of the unplaced Turnbull run when under two lengths beaten.

Mystic Journey races at Moonee Valley for the first time since winning the Group 2 MV Fillies Classic (1600m) as a three-year-old last Cox Plate Day and chases her first win over further than a mile on Saturday.

Barrier six is the most successful in Cox Plate history producing 11 champions, most recently Winx for her unprecedented fourth victory last year.

Currently drawn in barrier seven, it is the Godolphin-raced Avilius who will move into the coveted gate six draw in the Cox Plate field if the third emergency Gailo Chop (1) fails to gain a start.

Avilius (7) looks set to come into barrier six in the Cox Plate field that has produced 11 winners in the race’s history including Winx (2018) for her fourth success last year Bet now with Ladbrokes.com.au

Avilius is at $11 Cox Plate odds to improve on his fourth in the race 12 months ago, the subsequent Ranvet Stakes – Tancred Stakes double winner in Sydney having won yet another Sydney Group 1 this campaign in the George Main Stakes (1600m) on September 21.

He backed-up with a credible fourth in the Group 1 Ladbrokes Stakes (2000m) at Caulfield behind Cape Of Good Hope on October 12 and remains a winning chance over the same distance at Moonee Valley this weekend.

As for the aforementioned Castelvecchio, trainer Richard Litt was thrilled his Group 1 winning youngster secured the final spot in the 14-starter Cox Plate field.

A week on and Castelvecchio is the sole three-year-old in the 2019 Cox Plate field drawn a treat in barrier four (likely into three) with Craig Williams to ride.

Williams chases his third Cox Plate win since 1999 having ridden Fields Of Omagh (2006) and the ill-fated Pinker Pinker (2011) to victory.

A juvenile Group 1 winner in Randwick’s Champagne Stakes (1600m) back in April, the up-and-comer is fourth-up this weekend on the back of his second in the Group 1 Spring Champion Stakes (2000m) and makes his Melbourne race debut.

Other standout Cox Plate horses in 2019 include evergreen nine-year-old Black Heart Bart (11) chasing a $1 million bonus after having a late entry fee paid, the other Japanese raider in the mix Kluger (9) who ran second to Winx in April’s Queen Elizabeth Stakes and Lindsay Park’s Ladbrokes Stakes winner Cape Of Good Hope (8).

See below for the full Cox Plate 2019 field and barriers with updated odds available here from Ladbrokes.com.au.