Dalasan is the drifting favourite, while the punters are starting to come for the Anthony Freedman-trained market mover Groundswell following the scratching of The Holy One from Saturday’s 2019 Ladbrokes Caulfield Guineas. 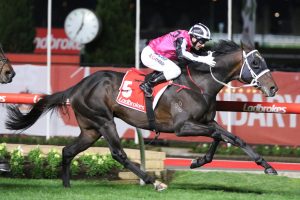 Stutt Stakes winner The Holy One has been scratched from the 2019 Ladbrokes Caulfield Guineas field due to a stone bruise. Photo: Ultimate Racing Photos.

There remains a capacity line-up of 16 three-year-olds in the mix for this season’s Group 1 $2 million Ladbrokes Caulfield Guineas (1600m) with first and second emergency Exeter and Groundswell gaining a start in the stallion-making feature.

The Peter & Paul Snowden-trained Creator (19) came out earlier in the week after drawing the outside alley, while Trent Busuttin & Natalie Young were forced to scratch their contender The Holy One on Friday morning.

An in-form son of Tavistock, The Holy One was last seen winning the Group 2 Stutt Stakes (1600m) at The Valley on September 27.

The colt suffered a stone bruise at trackwork on Thursday morning and was unable to overcome the hoof issue in time to run in the Group 1 classic.

“There’s no serious injuries, it just looks like a stone bruise has popped up at an unfortunate time,” co-trainer Busuttin told The Age.

“It’s an everyday occurrence, at this stage it’s just happened at the wrong time.”

His withdrawal sees Fastnet Rock colt Groundswell come into the starting line-up looking to improve on his close third when under a length beaten in the Group 3 Caulfield Guineas Prelude (1400m).

Jockey Kerrin McEvoy will ride Groundswell, who has firmed from $17 into $10 in the latest Caulfield Guineas odds at race sponsor Ladbrokes.com.au, coming off Queenslander Eric The Eel to do so.

A $34 outsider racing second-up off a third at Doomben in a BM70, Stuart Kendrick’s Olympic Glory gelding Eric The Eel will now be partnered by Brett Prebble who was originally assigned to ride The Holy One.

Just three runners are currently at single-figures in Ladbrokes Caulfield Guineas betting with the widely-drawn favourite Dalasan on the drift out to $3.90.

Hugh Bowman partners the chestnut colt who is looking to atone for a last start second to Alligator Blood in the Prelude, the ace hoop replacing Raquel Clark in the saddle.

The upset Prelude winner Alligator Blood for Sunshine Coast horseman David Vandyke is then the $5 second elect to remain undefeated with a sixth straight career success.

The son of All Too Hard is bred for a Guineas win with his sire taking out the race in 2012, jockey Ryan Maloney retaining the ride.

At $7, Kubrick for premier Sydney trainer Chris Waller then rounds out the hopes under $10 for the win with James McDonald aboard.

Chris Waller and James McDonald chase successive Caulfield Guineas wins with Kubrick after the victory by The Autumn Sun in 2018 Bet now with Ladbrokes.com.au

Waller and McDonald combined last year to take out the Caulfield Guineas with The Autumn Sun, the duo looking for back-to-back victories this year with Shooting To Win colt Kubrick coming off a Sydney form-line.

He finished a second-up fifth in the Group 1 Golden Rose (1400m) behind Bivouac, but should appreciate getting a mile three runs in after his close second in Brisbane’s Group 1 JJ Atkins (1600m) as a juvenile.