Verry Ellegant Wins Hill Stakes in a Photo Over Samadoubt

It wasn’t pretty, but mighty mare Verry Elleegant dug deep at Randwick on Saturday to pull out a gutsy win in the Group 2 Hill Stakes (2000m).

Jockey James McDonald found himself with plenty of work to do having already ridden three winners on the day. The pair found themselves second-last on the final turn with plenty of ground to make up, setting up a thrilling photo finish between Winx Stakes winner Samadoubt, who led from the barriers. 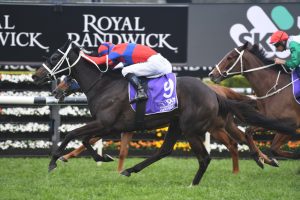 A lucky bob of the head saw Verry Ellegant over the line, but it was a less than convincing display from the race-favourite. The four-year-old mare looked to be in a nice rhythm early on eight lengths off, but the talented Kiwi galloper certainly made punters sweat down the straight.

“She’s been a work in progress, she’s obviously never going to change I don’t think, but she tries hard, she loves wet ground, she ticked a few boxes today and rounded them up nicely,” McDonald said after the race.

Saturday wasn’t the first time Verry Elleegant kept things interesting. Waller has experimented with gear changes since first acquiring the horse from Darren Weir last November, but taking the nose roll off seems to have done the trick after winning back-to-back Group 1 starts earlier in the year.

Waller was bullish when asked where he’d send the horse next, but it seems he still hasn’t made his mind up on the Caulfield Cup or the Ladbrokes Cox Plate.

“I think we know where she is at. Just need to work out a race for her. I won’t want to jump in today. It will be the Cox Plate or the Caulfield Cup,” Waller went on to say.

Second place-getter Samadoubt lost no admirers leading from barrier to box. The speed was well and truly on down the straight, and the six-year-old certainly found something extra with Verry Elleegant challenging on the outside.