After a lengthy 946 days between wins, the Lindsey Smith-trained nine-year-old warhorse Black Heart Bart returned to his best saluting in the Underwood Stakes 2019 for the second time. 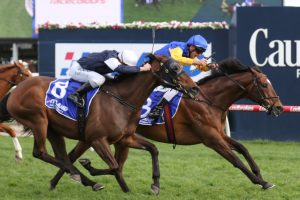 Originally prepared in Perth by Vaughn Sigley and then by Darren Weir in Victoria, the son of Blackfriars became a six-time Group 1 winner with his upset at 100/1 in Sunday’s Group 1 $750,000 Underwood Stakes (1800m).

He won the same weight-for-age feature back in 2016 as the $2.20 favourite, but was at triple-figures in 2019 when becoming the first dual Underwood Stakes winner on non-successive years since Lord (1958, 1960).

It was an incredible Underwood Stakes result for the horse whose last win was back in February of 2017 when Black Heart Bart took out that autumn’s Group 1 CF Orr – Futurity Stakes double at Caulfield.

He was third-up this year coming off a distant 11th in the Group 1 Sir Rupert Clarke Stakes (1400m) at the track just last weekend, Smith pulling off a master training effort to back the horse up and get him out over 1800m.

On the line Black Heart Bart ($101) held a narrow margin over the beaten favourite, last year’s Underwood Stakes winner Homesman ($2.50F), who was caught wide throughout the trip.

Fellow comeback galloper Gailo Chop ($26) then rounded out the trifecta in third just ahead of the James Cummings-trained veteran Hartnell ($4.20).

Jockey Brad Rawiller continued his association with the grand old campaigner riding the two-time Underwood Stakes winner for the 25th time, the hoop emotional after the unlikely victory.

“Today he just bounced and it was obviously going to be a different temp at the 1800 metres.

Smith was also thrilled with the Underwood Stakes win, although he admitted he wasn’t quite as attached yet to Black Heart Bart as all the staff at the Warrnambool stables who have long been a part of the galloper’s incredible career since he came to Victoria in 2016.

“Well done to the jockey…all the staff love him.”

Black Heart Bart was the only Underwood Stakes runner not among the second acceptances for the Group 1 $5 million Ladbrokes Cox Plate (2040m) at The Valley on October 26.

Connections however are likely to be very tempted to pay the hefty $130,000 late entry to get him into the weight-for-age championship after the Underwood Stakes victory saw Black Heart Bart become eligible for the $1 million Ladbrokes Cox Plate Boost Bonus.