Godolphin-raced favourite Alizee has a wide barrier 11 of 13 barrier to overcome as she looks for back-to-back wins to continue her spring in Saturday’s 2019 Memsie Stakes field. 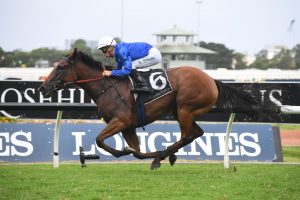 Alizee has jockey Damien Oliver aboard for the first time in Saturday’s 2019 Memsie Stakes field at Caulfield. Photo: Steve Hart.

The brilliant Group 1 winning mare already boasts an elite level win at the track and distance in this year’s Futurity Stakes.

She is now very well-supported in the markets at Ladbrokes.com.au to take out the Group 1 $1 million Memsie Stakes (1400m) second-up.

Her campaign kick-off was on August 10 in Sydney’s Group 2 Missile Stakes (1200m) where she narrowly defeated the Kris Lees-trained duo of Invincible Gem and Le Romain.

The Missile Stakes form was subsequently franked last weekend with the runner-up, Invincible Gem, finishing a close third behind upset winner Samadoubt in the season’s opening Group 1 race – the Winx Stakes at Randwick.

Sepoy five-year-old Alizee has Damien Oliver jumping aboard for the first time in her Memsie Stakes bid and the hoop is confident he is on the right horse in the weight-for-age feature.

“It’s really exciting to get an opportunity on a class horse like her,” Oliver, 47, said this week.

“I’ve ridden a Group 1 winner for James’ grandfather [Bart] and father [Anthony], and it’d be nice to win one for him, too.

“And she’s got what sets great horses apart from others – she’s got great acceleration.

“That’s what you want – a horse than can get you in and out of trouble when you need to and quicken up when they need to.”

Cummings and Godolphin also have the ultra-consistent veteran Hartnell in this season’s Memsie Stakes field.

The multiple Group 1 winning champion is drawn the inside alley as he chases his first turf triumph since the 2018 Epsom Handicap.

Hartnell became just the 11th horse in Australian racing history to amass over $7 million in prize money when he finished a brave third behind Cox Plate favourite Mystic Journey first-up in the Group 2 P.B. Lawrence Stakes (1400m) at Caulfield on August 17.

Incredibly, Saturday will be the 29th Group 1 start for the import whose record at the top level includes three wins and another dozen top three finishes.

This weekend Craig Williams replaces Hugh Bowman in the saddle, riding Hartnell for the first time since a fourth over the mile at The Valley in September of last year.

Last year’s Memsie Stakes winner Humidor is back chasing successive wins in the feature for the first time since the great mare Sunline (2000-01).

Humidor is after back-to-back Memsie Stakes wins for the first time since Sunline (2000-01) Bet now with Ladbrokes.com.au

The Ciaron Maher & David Eustace-trained Teofilo gelding won the race from barrier three as a $31 hope 12 months ago.

He returns first-up on Saturday from a wider gate 10 draw with last year’s winning hoop Damian Lane continuing his lovely association with the now seven-year-old.

Humidor is joined by stablemate Cliff’s Edge (2), the Canford Cliff’s entire presenting fit third-up on the back of his brave second when run down late in the P.B. Lawrence Stakes.