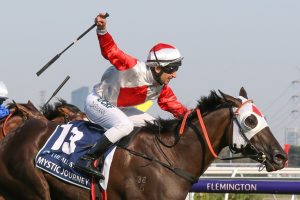 The headline runner in this year’s PB Lawrence Stakes field is the Tasmanian raider Mystic Journey who chases her seventh straight win first-up.

Mystic Journey has amassed over $3.26 million in prizemoney in her 13-start career, which has produced 10 wins including in the inaugural $5 million All-Star Mile at Flemington on March 16.

She hasn’t lost since August of 2018 and is a proven performer over the PB Lawrence Stakes track and distance having won here last September before her Group 2 MV Fillies Classic (1600m) victory on Ladbrokes Cox Plate Day.

The history-making star was the first Tasmanian-trained Group 1 winner in a century when she beat the boys in the Group 1 Australian Guineas (1600m), and she currently leads all-in betting at Ladbrokes.com.au on this year’s Group 1 $5 million Ladbrokes Cox Plate (2040m).

Trinder has kept his stable ace fit with two trials at home, the latest on August 6, and Mystic Journey odds-on at $1.85 P.B. Lawrence Stakes odds for this weekend.

Another favourite with the punters in PB Lawrence Stakes betting is Godolphin’s returning veteran, nine-year-old Hartnell at $5.50.

The brilliant old warhorse won this race back in 2017 and was also second to Showtime in last year’s PB Lawrence Stakes results.

Age has not dulled Hartnell’s recent form either, the three-time Group 1 champion coming off an outstanding autumn campaign.

Hartnell has run in 28 Group 1 races, the first two internationally when prepared overseas, and the import’s strike-rate at elite-level is incredible.

Along with his three victories he boasts a further 12 top three placings, the latest when third behind Winx in April’s Group 1 Queen Elizabeth Stakes (2000m).

Hartnell also has form around Mystic Journey having run second to her in the All-Star Mile, which followed his third to Alizee in the Group 1 Futurity Stakes (1400m) at Caulfield.

The other two single-figure hopes are Cliff’s Edge ($6.50) and Fifty Stars ($8) drawn in barriers nine and eight respectively.

Cliff’s Edge is one of only two in the race not first-up and so the Canford Cliffs five-year-old boats the fitness edge second-up.

The Ciaron Maher & David Eustace-trained dual Group 2 winner ran first-up on July 27 in the Group 3 Bletchingly Stakes (1200m) at Caulfield and finished third behind Scales Of Justice who heads to Adelaide this weekend for the Group 3 Spring Stakes.

He may be yet to win at the top level, but Cliff’s Edge continues to ooze potential as a lightly-raced galloper and genuine Caulfield specialist who has won four-from-nine at the track.

The stable’s other runners are roughie hopes Harlem, Sikandarabad and Neufbosc all opening at $41 PB Lawrence Stakes odds.

The other headliner after an upset win at $12 is Kenedna, the Maher/Eustace mare after her third consecutive win after back-to-back Brisbane victories in the Group 1 Doomben Cup (2000m) and Group 2 P.J. O’Shea Stakes (2200m).

The PB Lawrence Stakes runs as Caulfield Race 8 at 4:40pm on Saturday.