The in-form Ciaron Maher & David Eustace-trained Yogi will lump the 60kg topweight around in the feature race on the weekend in Eagle Farm’s Queensland Cup 2019. 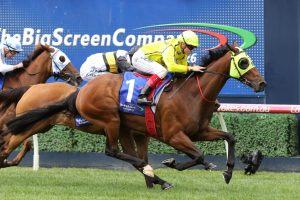 The early scratching of the in-form Our Mantra (12) drawn the outside gate however leaves 11 hopefuls in the two-mile classic.

Heading the Queensland Cup field and weights is Raise The Flag six-year-old Yogi coming off a devastatingly close second first-up.

The proven two-miler was narrowly beaten by Destiny’s Kiss at Rosehill on June 15 in the Listed Winter Cup (2400m) and presents fitter second-up ready to run a strong 3200m.

Maher & Eustace are dually represented in this year’s Queensland Cup field, the stable also accepting for the French-bred Azuro.

Like Yogi, the five-year-old son of Myboycharlie has previous winning form over the distance having won the Stayers Cup (3200m) at Rosehill last time on out June 29.

The OTI Racing-owned galloper saluted that day on a Heavy (9) so will benefit from any rain around ahead of the weekend and also looks well-weighted dropping from 56kg to 54kg with the flying Matthew McGillivray to take the mount.

“Azuro was very strong at the end of the 3200 metres in the Stayer’s Cup and Yogi won at the distance in the Sandown Cup where Azuro was second,” stable representative Annabel Neasham told the media this week.

“It is hard to get a line on who will run in Brisbane but our horses have the staying form on the board.

“They don’t get many chances to run over 3200 metres and we have to take them when they come.”

The other best out of the Stayers Cup backing-up in the Queensland edition on Saturday is the Kris Lees-trained runner-up Doukhan.

The oldest horse in the race, the 10-year-old son of Dansili was terrific last time out for Australian Bloodstock and looks a massive hope on Saturday getting in on the 54kg minimum.

Lees also has his European import Saunter Boy in the Queensland Cup race chasing his first win down under at start number four for the stable on the back of a Caloundra Cup fifth.

The only other last start winner in the mix is the Gold Coast-trained Husson’s Pride for Kelly Doughty.

The Husson four-year-old saluted by 2.25 lengths at Doomben over 2200m on July 10, but rises notably in both class and distance on Saturday.

Along with Yogi the other highest-rated Queensland Cup hopeful this season is the Chris Waller-trained Exoteric.

British-bred, the six-year-old is out to atone for a string of unplaced runs this campaign including his fourth to Igraine at the Sunshine Coast two back in the Listed Caloundra Cup (2400m) run on a Heavy (10).

Last start Exoteric finished eighth in the Listed Grafton Cup (2350m), but he comes back from 59kg that run to 56.5kg on Saturday and looks a winning hope in his first go at the two-miles.

The Kiwis have had plenty of success across the Queensland Winter Racing Carnival this year and Otaki-based trainer Howard Mathews will be hoping that continues in the Queensland Cup as he saddles-up his veteran stayer Sampson.

A rising 10-year-old, Sampson has run over the 3200m six times previously for two placings and was last seen running a disappointing fifth at Doomben last Saturday.

On the quick seven-day turnaround the galloper will be looking to improve coming right back from 58.5kg to 55kg and getting out over a far more suitable distance.

His best run this campaign was on June 15 when runner-up in the Listed Ipswich Cup (2150m) carrying 58kg as a $26 roughie, Sampson to be ridden by Michael Cahill this weekend.

Third in the Caloundra Cup last time out, the Paul Jenkins-trained mare Travistee steps up in distance in gate seven this weekend and also shapes-up as a genuine hope.