The punters are in for a tough time on Saturday at Caulfield Racecourse with a very open edition of the Sir John Monash Stakes 2019. 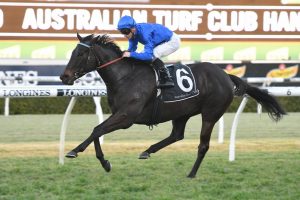 This follows the scratching of the Mick Price & Michael Kent Jnr. filly Crack The Code (9) who was down to resume racing in the weight-for-age feature.

Updated Sir John Monash Stakes odds at Ladbrokes.com.au are led by the Godolphin-raced Soothing into $4.

The James Cummings-trained daughter of Lonhro runs for the first time since her close fourth when under a length off the winner Malibu Style in the Listed Doveton Stakes (1000m) at Sandown last November.

She has had two recent trials, the latest crossing second over 1045m at Randwick on a Heavy (9) track on June 28.

The four-year-old is a noted first-up performer with three wins from four runs fresh to date and also has outstanding form over the 1100m distance (9:4-1-1) that she will be out to capitalise on this weekend.

There are a further four single-figure fancies in the current Sir John Monash Stakes betting markets at Ladbrokes.com.au including Bandipur ($5.50) and the early mover Heart Conquered ($9 into $6.50).

He was last seen defeating the Doveton Stakes winner Malibu Style by a quarter-length over the Sir John Monash track / distance on June 1 carrying 57.5kg.

For the rematch Bandipur goes up to 58.5kg and has ace hoop Craig Williams in the saddle again.

The chestnut is after his first win since January and has been in fine form this campaign including a close fifth when under two lengths beaten in Randwick’s Listed June Stakes (1100m) in the wet two back.

His last start produced a third when only a half-length off the winner Top Striker at Rosehill on June 29 in a BenchMark 94 over 1100m, also contested in Heavy going.

This is obviously a class test for Heart Conquered, but the gelding was flying home last start and gets the chance to surprise here with conditions to suit.

The next best in betting are then $7 fancies Jungle Edge and the aforementioned Malibu Style drawn at opposite ends of the field in barriers 13 and three respectively.

Known mudlark Jungle Edge may be a rising nine-year-old but Mick Bell’s Dubawi gelding is going as good as ever.

He carted 58.5kg to victory at Sandown-Lakeside two back defeating Malibu Style over 1200m before a last start third in the Winter Dash (1200m) at Randwick.

Saturday marks his 72nd career start and the galloper has the right speed to go forward from the wide gate and give them something to beat.

Neville Parnham’s Perth raider Malibu Style meanwhile is sure to attract plenty of attention coming off a number of good lead-up runs including the Listed $160,000 All Victorian Sprint Series Final (1200m) win down the Flemington straight only last weekend.

“He pulled up enormous so unless anything unforeseen happens, he’ll back up,” Parnham told The West Australian.

“Hopefully he’ll produce what he did last week and be in this race up to his ears.”

Back your Sir John Monash Stakes 2019 tips at the best odds online through Ladbrokes.com.au.