A huge effort in the wet to take out last weekend’s Caloundra Cup by over two lengths has the Robert Priscott-trained Kiwi mare Igraine as the early favourite in Grafton Cup 2019 betting for next Thursday. 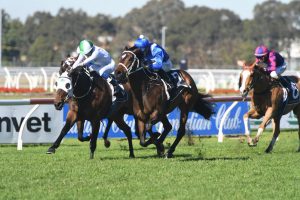 He Ekscels is one of the early 2019 Grafton Cup favourites. Photo: Steve Hart.

Heading the Grafton Cup nominations and weights with a hefty 59kg allocation, German-bred Galileo six-year-old Igraine will be chasing a winter cups double.

She saluted on a Heavy (10) Sunshine Coast track on June 29 by over two lengths when Robbie Fradd rode the New Zealand raider to victory in the Listed Caloundra Cup (2400m).

Igraine only had 54kg that day and will need to be on the improve with a notable five kilograms more in the Grafton Cup.

Still, the bookies are taking no chances with the Caloundra Cup winner at $4 in pre-field Grafton Cup betting at Ladbrokes.com.au.

Second elect at all-in Grafton Cup odds of $6 are then He Ekscels and Primitivo.

Ekraar five-year-old He Ekscels chases a third win on the trot after wins at Echuca and Rosehill respectively.

He is yet to win over further than 2100m, but thrives on a wet track and is in flying form this preparation.

The John Thompson-trained Primitivo is another last-start winner, the four-year-old son of Sebring having saluted on a Heavy (8) Randwick track on June 22 over 2000m.

That was his third victory from 16 starts and Primitivo looks well-weighted for the Grafton Cup coming back from 56.5kg to next Thursday’s 54kg minimum.

Thompson has also nominated for Mossman six-year-old Reneged ($15), winner of the 2016 Grafton Guineas and third in last year’s Grafton Cup trifecta when only a length off the winner First Crush.

Along with the winner Igraine, the other best Caloundra Cup graduates nominated for a rematch in the Grafton Cup are the Ciaron Maher & David Eustace-trained runner-up Sopressa and the Chris Waller-trained fourth placed Exoteric.

Four-year-old So You Think mare Sopressa is at a current $11 quote going up from her 54kg Caloundra Cup weight to 56.5kg at Grafton.

Exoteric meanwhile is the 59kg co-topweight with Igraine, the European import chasing his first turf triumph since the Listed ATC Cup (2000m) at Rosehill in December last year.

Currently Exoteric is at $7 in the Grafton Cup futures, equal with Richard Laming’s consistent Host mare No Money No Honey who comes off four top three runs this campaign.

Prepared by John Gilmore, Pluck five-year-old Happy Go Plucky won the Grafton Cup Prelude (2200m) carrying a hefty 61kg on June 30 and will relish the drop back to 54kg on Thursday chasing the double.

The official Grafton Cup 2019 field and barriers are out on Monday followed by updated markets at Ladbrokes.com.au.