A run in The Everest 2019 at Royal Randwick this spring could be calling for gun mare Spright should the Garry Frazer-trained daughter of Hinchinbrook win Saturday’s Group 1 $500,000 Tattersall’s Tiara (1400m) at Eagle Farm. 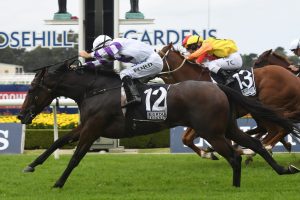 Tattersall’s Tiara runner Spright is hoping for a slot in October’s 2019 The Everest race in Sydney. Photo: Steve Hart.

Hawkesbury-based horseman Frazer is hoping for another Group 1 winning performance from his in-form five-year-old, which could attract the interest of slot-holders in the world’s richest race on turf – the $14 million The Everest (1200m) on October 19.

“We are hoping to still got a slot in the Everest,” Frazer told the media this week.

“There is a bit of interest there. I think a good performance on the weekend would [put her in the frame].

“She has raced against all those horses that will be in the Everest and if there is a heap of speed, you would think she would have a genuine hope.”

A winner of close to $1.4 million in prize money over her 31-start career to date, Spright enjoyed an elite level win in early May when saluting from barrier 13 of 13 in Morphettville’s Group 1 Robert Sangster Stakes (1200m).

She has finished competitively in her two runs since when only 1.3 lengths back third in the Group 1 The Goodwood (1200m) in Adelaide and 3.4 lengths back fourth to Trekking in Brisbane’s Group 1 Stradbroke Handicap (1400m) on June 8.

Spright returns to the same track and distance as the Stradbroke this weekend and goes up from 53.5kg to 57kg at weight-for-age when back against her own kind.

The well-travelled mare will be having her ninth Group 1 start in the Tatt’s Tiara this Queensland Winter Racing Carnival.

Her other standout runs at the highest level include her third to Viddora in the 2018 Moir Stakes (1000m), finishing under a length back fourth to Brave Smash in that year’s Manikato Stakes (1200m) and her second behind Sunlight in this autumn’s William Reid Stakes (1200m) – all held at The Valley.

“She never, ever runs a bad race and is as honest a mare you’d ever like to have,” Frazer said of his star mare.

“She is just one of those horses that travels away good and settles in wherever you take her. I think she has got better as she’s got older to be honest.

“She has raced in Group and Listed races all her life and never gone around in (average) races anywhere.

“She’s going really good and I couldn’t be happier with her to be honest with you.

“Glen Boss reckon she should have run second the other day too. She just got smashed at the start.”

She drew barrier 10, which could become gate eight at best with the emergency runners out.

Current all-in The Everest betting markets at Ladbrokes.com.au list Spright as a $101 roughie.

TJ Smith Stakes winner Santa Ana Lane ($5.50), currently the world’s highest-rated sprinter for the year so far, holds favouritism in the pre-field 2019 The Everest odds and has already secured a slot.