Only a fortnight on from winning at Group 2 level in the Phar Lap Stakes, some simple gear changes proved the difference for the Zed filly, who appeared much more relaxed with the ear muffs on and the nose roll off. 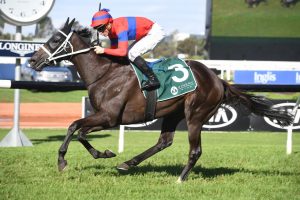 Verry Ellegant found herself back on the fence after the jump to sit fourth from the rear at the 1000m mark. Jockey James McDonald found the outside position around the bend and allowed the horses dazzling turn of foot to do the rest down the straight.

Waller thinks he’ll target next month’s $1 million Australian Oaks (2400m) at Randwick on April 13, instead of backing up in the Australian Derby (2400m) on April 6.

“I think so, I don’t think she likes the second-day back-up, that’s the reason she didn’t run in the Australian Guineas, I wouldn’t attempt for a backup” Waller said after the win.

“The Oaks will do, I was thinking after today if we didn’t win the Queensland Oaks would give her more time, but I don’t think we’ve got that luxury, so now we can go to the Oaks with a bit of confidence.”

Saturday’s win marked Waller’s 98th Group 1 victory and the first for Verry Elleegant after a disappointing display in the Kennedy Oaks at Flemington last year.

Veery Ellegant’s form was never a question on the heavy track, as the three-year-old is now a perfect 2-0-0 not only in the wet, but also at Rosehill. If she can savage the line once again, she stands a chance at claiming back-to-back wins in the Oaks for Waller following Unforgotten’s success last year.

“She’s very smart. Obviously just needed a little bit of working out and having the confidence to take gear off and put extra gear on is easy when you’re training winner, but we needed to tell the punters going into a Group 1 race ‘don’t worry, we’re putting ear muffs on just to help relax, and taking the nose roll off because it wasn’t doing anything, but obviously the horse has got talent.”

Verry Ellegant is now the $2.10 favourite for the Oaks. Second placegetter Frankely Awesome also surprised on the weekend and has since firmed into the $7.50 second-elect.