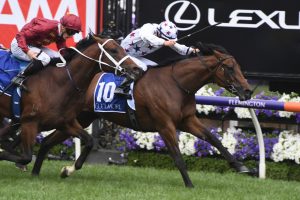 Sunlight, above, will line up in the 2019 Black Caviar Lightning at Flemington. Photo by Steve Hart.

Under the weight for age conditions of the Black Caviar Lightning, the Lloyd Kennewell trained two year old filly Jedastar will only have to carry 44kg and Caserta is determine to get down to the featherweight.

“I’ve still got a couple more to lose come Saturday but it looks like I’m going to be doing it quite comfortably,” Caserta told racing.com.

“There’s not much of me but it’s coming off me pretty good.

“It’s been a good experience, I’ve finally got to live how most jockeys live, not just eating and drinking what I want because I’m a lightweight.

“I can’t wait come Saturday night when me and the family go out for dinner after the race and then on Sunday when we have a big Italian festival at home.”

The lightly raced Jedastar is facing a tough task taking on seasoned Group 1 winners after only having been to the races on two occasions for a debut win against the two year old fillies on January 1 over the same course and distance as the Black Caviar Lightning plus a second to Catch Me in the Group 3 $160,000 Ladbrokes Blue Diamond Preview (Fillies) (1000m) at Caulfield on January 26.

Sunlight is kicking off her 2019 Autumn Carnival campaign in the Black Caviar Lightning and the Tony McEvoy trained filly is having her first start since winning the Group 1 $1m Coolmore Stud Stakes (1200m) down the Flemington straight on the first day of the 2018 Melbourne Cup Carnival.

The James Cummings trained Osborne Bulls will carry the number one saddlecloth and has drawn barrier five with Craig Williams booked to ride.

Osborne Bulls is also a last start winner down the Flemington straight and will be having his first race start since winning the Group 2 The TAB Stakes (1200m) on the same day as the Coolmore Stud Stakes.

Group 1 winner In Her Time has drawn the inside gate for Corey Brown while Written By has drawn the outside barrier with regular rider Jordan Childs in the saddle.