I Am Immortal Now Among Ladbrokes Blue Diamond Stakes Favourites

Ben Melham kicked off a big day for Anthony Freedman at Caulfield on Saturday, riding home $2.50 favourite I Am Immortal to claim the Ladbrokes Blue Diamond Prelude (1100m).

It was a thrilling edition of the boys race as Freedman’s two-year-old held off a late challenge from the likes of Shotmaker and Hawker Hurricane to win by half a length.

I Am Immortal jumped well from barrier 2 with Melham on board, and at one stage led by two lengths down the straight. At the 200m mark, the son of I Am Invincible found an extra gear and dove towards the line to claim an impressive second-up win. 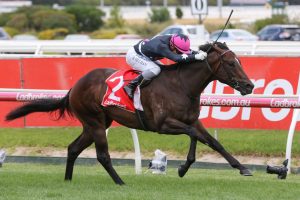 I Am Immortal is now among the favourites ahead of the Group 1 Ladbrokes Blue Diamond Stakes. Photo Credit: Ultimate Racing Photos.

“He’s left the barriers well, he could just sense there was a runner outside him, just wanted to get off the bridle in the middle stages, but obviously a young horse, still learning, and he’s got a very bright future.”

The win makes it two-from-two for the Freedman prospect ahead of next fortnight’s $1.5 million Group 1 Ladbrokes Blue Diamond Stakes (1200m). Not surprisingly, I Am Immortal has firmed from $9.00 into $6.00 behind favourites Loving Gaby and Athiri, and while the step up in trip might pose a few questions, Melham still thinks there’s plenty of improvement to come.

“He’s gone up an extra 100m today, and obviously the staff at home have done a great job with him.

“He was a little bit edgy late, but the way he trains, he still has improvement in him,” Melham said.

Second place-getter Shotmaker was equally impressive in his first-ever start, and has also firmed from $15.00 into $11.00 with Ladbrokes.