The speedy six-year old stalked the pace from a two-wide position around the final turn, and looked a chance at winning as jockey Michael Walker shifted to the outside once a lane opened up down the straight. 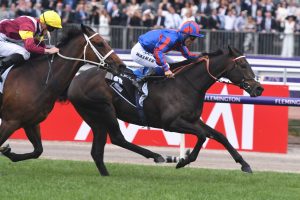 A Prince of Arran, above, ran third in the 2018 Melbourne Cup.

In the end it wasn’t enough to hold off Cross Counter, who patiently weaved his way from the very back of the pack to storm home over the final furlong.

Still, Fellowes was wrapped with his horses preparation, especially on a very wet track.

“Unbelievable run, for a horse to run three-days after running over a mile and a half, and winning, on ground we know that’s not his cup of tea, unbelievable” Fellowes said after the race.

The plan ahead for A Prince of Arran is unclear, but his prep so far has been extremely encouraging. He’s run no worse than third in his three starts since arriving in Australia last month, and it’s now to safe to say, we can probably expect to see this premier international stayer back on our shores next Spring.

“If we didn’t have to run three days ago and if we hadn’t have got the rain, jeez he would have gone close,” Fellowes went on to say.

“Michael Walker has given him an absolute belter of a ride and I’ve never experienced anything like it.

A Prince of Arran entered the race as a $5.70 place chance with Ladbrokes.