Homesman Could Be Melbourne Cup Bound With Caulfield Stakes Win

Underwood Stakes winner Homesman is hoping to make it back-to-back Group 1 wins this Saturday in the $1 million Ladbrokes Caulfield Stakes (2000m), and owner Nick Williams thinks his five-year old gelding is every chance to run a race.

“He hasn’t put a foot wrong for us, I think he’ll run very well for us” Williams told RSN’s Racing Pulse on Friday morning. 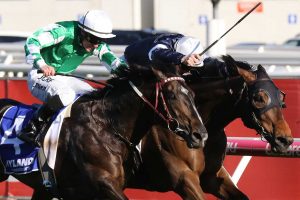 Homesman (inside) claimed a narrow victory over Tosen Basil in the Group 1 Underwood Stakes at Caulfield a fortnight ago.

“It’s a tougher race than the Underwood and a lot of it is going to come down to luck in running and the shape of the race, I think it’s a perfect guide for him a week out from the Caulfield Cup, he gets in with 53kg and if you look at it on ratings, he’s well in that race.”

Homesman, a Macedon Lodge import, steps up to 2000m this weekend, but could easily wind up the Caulfield Cup (2400m) favourite with a strong third-up win over a field of rivals this Saturday.

Williams didn’t comment on next weekend’s $5 million race, but did entertain the idea of a potential step up to two miles on November 6.

“I think you’d have to see how he runs next week,” Williams said when asked about a potential start in the Melbourne Cup (3200m).

“He’s by War Front, which doesn’t instill you with confidence that he’ll get two miles, but he’s out of a real ransom mare and they can leave you with anything.

The American import sat off the rails with jockey Ben Melham on board during the Underwood, and moved up to a two-wide position on the final turn. He showed tremendous turn of foot at the 400m mark, but was challenged late by Tosen Basil to win by a nose.

Darren Weir’s second placegetter will again feature on Saturday, as will Humidor, posing plenty of challenges for Homesman, after drawing barrier 10.

Jockey Jordan Childs gets the ride this time out, but still, a two-week break and a light Autumn preparation sees Homesman on the second line of betting at $9.50 with Ladbrokes.

The full field can be seen below.